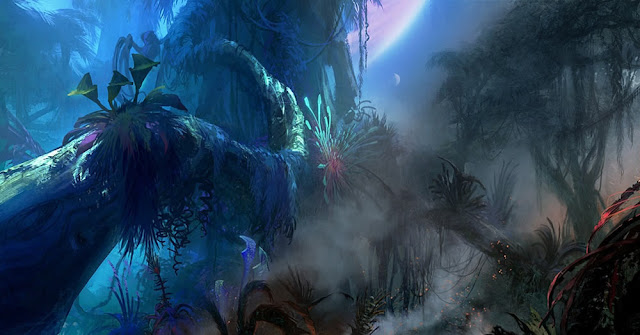 I was supposed to write something deep and meaningful about Avatar, but found that Gilad Atzmon, one of my favourite writers/musicians/activists, already had done so, and way better than I will ever be able to.

However, I might as well tell you this: At first, I was a huge sceptic.
I’m a pretentious asshole when it comes to movies, music, philosophy, literature, pretty much everything – and I like it that way. I was only interested in the technical aspects of the movie, and imagined the plot would be embarrasing. It was embarrasing as hell, worthy the mindset of a five year old, but I can deal with that this time, since the overall experience was completely mindblowing. You must see this in 3D in a good venue, anything else is a crime. It was a jaw-dropping experience, and so damned far away from the 3D experience I had back in the 80’s. The 3D stuff is certainly not a gimmick. I’d rate it 10/10 for being a true milestone in film art, but a mediocre 1/10 when it comes to the plot.
Also, the movie is interesting on so many different levels, other than the technical. The politically correct have been talking about Avatar as being racist against Africans, while the politically defect have been saying that Avatar is anti-white. I find both of their conclusions quite hilarious!

Avatar may well be the biggest anti War film of all time. It stands against everything the West is identified with. It is against greed and capitalism, it is against interventionalism, it is against colonialism and imperialism, it is against technological orientation, it is against America and Britain. It puts Wolfowitz, Blair and Bush on trial without even mentioning their names. It enlightens the true meaning of ethics as a dynamic judgmental process rather than fixed moral guidelines (such as the Ten Commandments or the 1948 Human Rights Declaration). It throws a very dark light on our murderous tendencies towards other people, their belief and rituals. But it doesn’t just stop there. In the same breath, very much like German Leben philosophers (Generally speaking the Leben Philosophers stood for paying philosophical attention to life as it is lived ‘from the inside’, as opposed to Kantian abstractions, scientific reductions, positivism and naturalism.), it praises the power of nature and the attempt to bond in harmony with soil, the forest and the wildlife. It advises us all to integrate with our surrounding reality rather than impose ourselves on it. Very much like German Idealists and early Romanticists, it raises questions to do with essence, existence and the absolute. It celebrates the true meaning of life and livelihood.

It is pretty astonishing and cheering to discover Hollywood paving the way to the victorious return of German philosophical thought.

One of the reasons that America is defeated in Iraq and Afghanistan is the obvious fact that many Iraqis and Afghanis had been educated in American universities and are familiar with the American way, yet, not many within the American elite or military command understand Islam. Not many amongst the American or British leadership are graduates of Kabul or Baghdad universities.

However, as in the case of Avatar, by the time America and Britain will start to train its forces to understand Islam, it may as well be ready for its new enlightened soldiers to change sides once they arrive on the battlefield.

I would maintain that to stand up against your own people for an ethical cause is the real meaning of humanism and liberty. Yet, it is pretty astonishing that such an inspiring message is delivered by Hollywood. We may have to admit, once again, that it is the artist and creative mind (rather than the politician) who is there to shape our reality and present a prospect of a better amicable future by the means of aesthetics.

One thought on “>Avatar 3D”