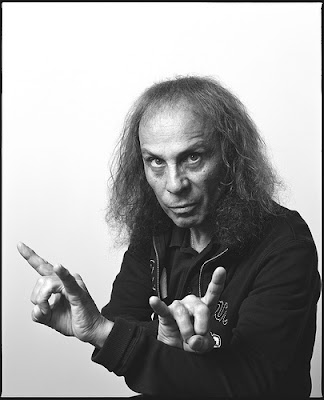 Ronnie James Dio – the master voice and wonder of evil heavy metal – passed away on Sunday, May 16th, 2010.

I don’t usually care that much when famous people pass away. Everybody dies. Ronnie was suffering from stomach cancer at the age of 67. It was just a question of time.
However, he was still the best heavy metal singer out there. His vocals were even better on stage than in the studio. To me, Dio is a true legend and his work has meant a lot to me. I believe the video for We Rock was the first song I ever heard from Dio (this very version), and that was back in 1984/85 on Swedish Television. I caught that on tape and it’s by far the most watched video ever in my home. Thus, The Last In Line is my favourite album, and being the doom fan that I am, I believe that Egypt (The Chains Are On) was one of the first doom songs I ever encountered. The lyrics suit my mental state more now than ever, the atmosphere is pure magic and Dio’s voice is – as always – superior.
Check out this amazing version where they incorporate Black Sabbath’s Children of the Sea – another great doom masterpiece.

Look out! The sky is falling down!