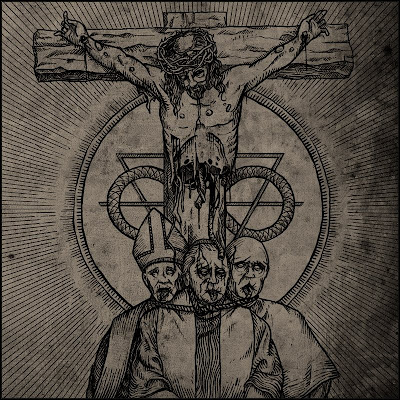 First and last illustrations in this article are stolen from Babalon Graphics.
Go there for more relevant art.
My belief in humanity and God was shattered many years ago. The belief in humanity and God to do good, that is. But ignorance, injustice, hypocrisy and plain evil are always present, and thus form the basis of the ultimate truth of mankind.
There’s no doubt in my mind that humanity would be better off dead, and it seems to me quite strange how one could see it any other way. What signs are there that tell of a brighter future? Signs of dystopia are present wherever there are humans.
It should be obvious. The history of mankind is sealed with blood. Man was put on earth to fight, wage war and destroy. That’s what history tells us, and why would this ever change? Mankind is not good enough. Never will be. Our future breed is the last, to quote a brilliant Neurosis song (read the lyrics here), and rightfully so.
The shrouded reason, the bleeding answer
The human plague in womb
Bring clouds of war
Let us rest
Our future breed is the last

Violence and religion have been closely related since the dawn of civilization. While institutionalized religions have used violence against both their disciples and their real (or imagined) opponents, there is also this thing with religion as a provider of spiritual and material comfort to its victims of political/social violence. It works both ways; religious faith can both motivate aggression as well as constrain it. Religion helps to normalize genocide by providing myths of ultimate redemption, or by saying that it’s ok to annihilate your neighbour… In short, religion is used to legitimize and motivate mass murder.

Christian churches were clearly involved on many levels in preparing the theological, moral, political and mythical basis for genocide in this century. The Institute and Eradication of Jewish Influence on German Religious Life, established in 1939, greatly contributed to spread the idea of Aryan-Christianity by ”proving” that Jesus was racially an Aryan who fought to destroy the Jews. Such German Christians defined themselves both as a chosen people and as a victimized people, and they were socially and academically respected. Even though there were supporters as well as opposers to Nazism among the church leaders, what most of them had in common was the dislike of Jewish presence in Germany. Instead of discussing the moral of what was going on, they provided the perpetrators of the atrocities with religious comfort. They provided a cozy home where the killers could find peace and support, resulting in moral numbness. 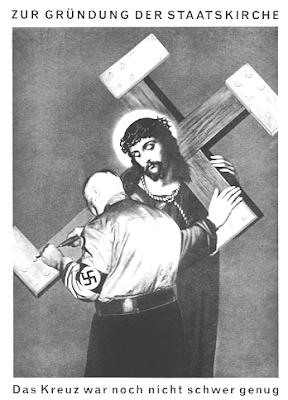 We all know about the traditional Jewish concept of Jews as the Chosen People, the Jewish exclusivity and the Holocaust with a capital H. It’s pretty ironic then that the Nazis adopted this concept, them being the racial superiors, the Chosen Ones, and that the Jewish victims, and those who helped rescue them, went for the Christian concept of universalism: all people are equal – especially the weak (!).
Nowadays universalism is rarely to be seen as the racist Zionist movement continues its relentless massacre. The Zionist movement insists on the uniqueness of the Holocaust and is consequently refusing to consider any other case of mass murder as comparable. For example, Zionists do not look upon Armenians as fellow victims of genocide. For many Jews the Holocaust was directly related to Christian antisemitism. Armenians are Christians. Hence, no support from the Zionists. Also, the state of Israel needs to maintain good relations with Turkey, which has never even acknowledged the Armenian genocide, not even expressing regret for it. Politics and religion, not a very good mix.

Speaking of the Holocaust, Palestine radical author Hayim Israel Tsimrman puts the blame for the Holocaust on the younger generation of pious Jews in the 1930s who rejected tradition and betrayed their task of carrying Judaism forward. Their abandonment of religion along with their failure to return to the Land of Israel made it even worse. In his book Tamim Pa’alo, written shortly after the war, he argues that this is the answer to the question ”Why did God do this to this nation?”.
Radical, indeed.

The genocide in Rwanda can be traced back to the impact of the Catholic church on the population. The Belgian and French colonialism — for its own purposes — separated the inhabitants into the ethnic groups of Tutsi and Hutu. The church took part in this process and shifted its support from one group to another according to whoever was in power. This eventually led to the phenomenon of priests taking an active part in decieving the Tutsi population, calling them to seek shelter in the churches, which then became sites of mass murder. Here was the true face of the church, who claimed to bring Western civilization and Western morality to non-European and non-Christian peoples. The Vatican still denies any role in this genocide, and many of those clergy men who were involved are still active in Rwanda. 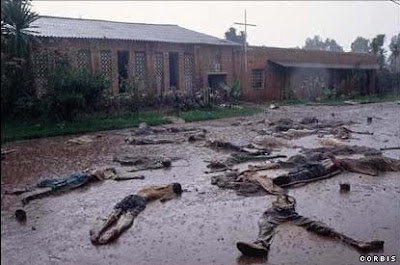 Back in the day of the mighty Inquisition, one was able to escape getting killed simply by converting to Christianity, thus losing one’s true identity, risking social exclusion and most importantly facing divine punishment. The horror!
Modern genocide tend to outrule this option, since religion tends to be related to race. The most extreme example might be how Serbian religious nationalists claim that Slavic Muslims suffer from a defective gene and therefore must be cleansed by murder or expulsion, since they cannot be transformed even by conversion.

8 thoughts on “>Belief and Bloodshed: The Religion of Genocide”