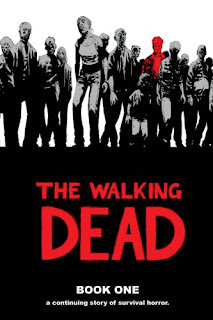 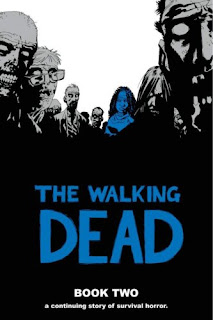 The Walking Dead by Robert Kirkman is that famous graphic novel currently being adapted for the screen as a TV series produced by the same channel that gave us Mad Men and Breaking Bad. It’s directed by Frank Darabont (The Shawshank Redemption, The Green Mile), so I’m definitely psyched. The first shots look very promising.

But at first, I wasn’t that impressed with the novel. It isn’t original at all; it’s that same old story of one dude waking up all alone in a hospital creeping with zombies, finding his way to a camp of survivors, etc, etc… Very standard. And man, I never thought I’d enjoy a soap opera! Because that’s exactly what it is. 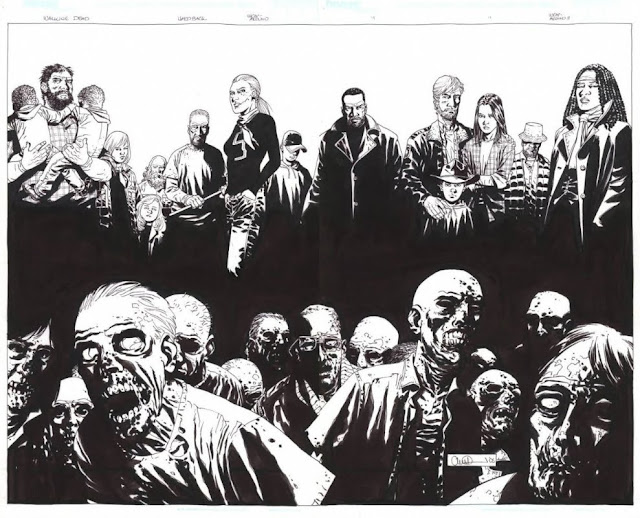 Kirkman states how he loves zombie movies, but hates their open endings. He always wanted to know where the characters went next, after the credits roll. That’s why – at this point, at least – the series is ongoing, pretty much stumbling on without an end. You might think it’ll get boring and repetitive, but having read the first four volumes (issue #1–48) I’m pretty impressed with the way things are going. In short, you’re up for a pretty dazzling post-apocalyptic zombie ritual soap opera.

Essentially, it all boils down to our basic human needs; breathing, eating, sleeping, fucking, exploiting, creating and destroying. It’s about our primal instincts and the reducing of humanity (yes, even among those that are alive – The walking dead are the survivors, in this sense). As the story unfolds and we get to know the characters, we’re in for some hefty relationship drama. And this is were the focus lies; on the ongoing building and shattering of relationships in times of hardship. This is about the people, not the monsters.

As this is pretty far from deep and rather filled to the brim with the most obvious cliches, I still like it. If I wanted deeper stuff, I’d probably go for Y – The Last Man instead. This is Zombie Lit,  and with that you also get the old fashioned sexist idiocy (which seems to be the very essence of the Lit genre…).  Compared to the complexity of Watchmen, for example, this reads more like Tom and Jerry. But as long as you know what to expect, I think it’s ok. 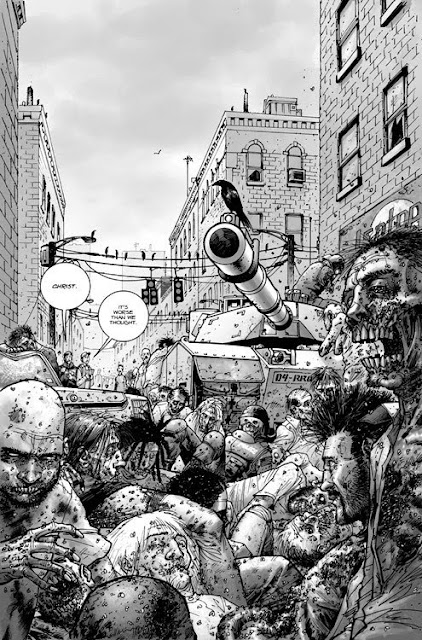 As for the art, we get some truly powerful, beautifully detailed illustrations of the most vicious gore. However, the art is far from consistent, which is a bit annoying. At times, it’s just splendid, like the larger panorama-like strips. But every now and then, I get the feeling the artist has been in a hurry. Also, there’s an artist change after the first six issues which makes it even more irritating. However, once you get past this moment of vexation, it’s pretty well executed. I’d like more of the details, though, like Glenn wearing Swollen Members- and Hieroglyphics shirts. Tony Moore, who did the first six issues and the cover art up until issue #24, is more into details, while Charlie Adlard, Moore’s successor, works in a more simplistic way. I like them both, though, even though I’d love to have every single strip as detailed as the cover below: 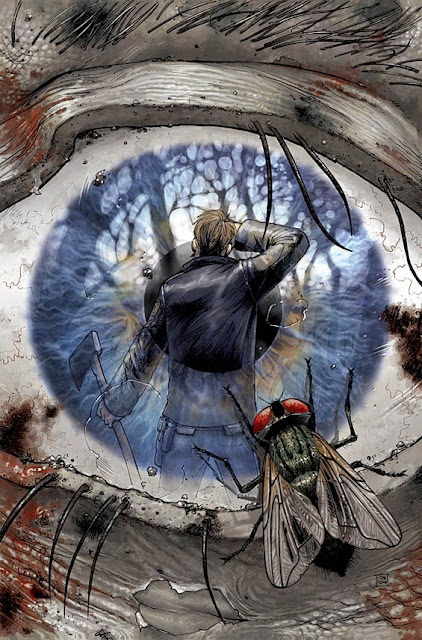 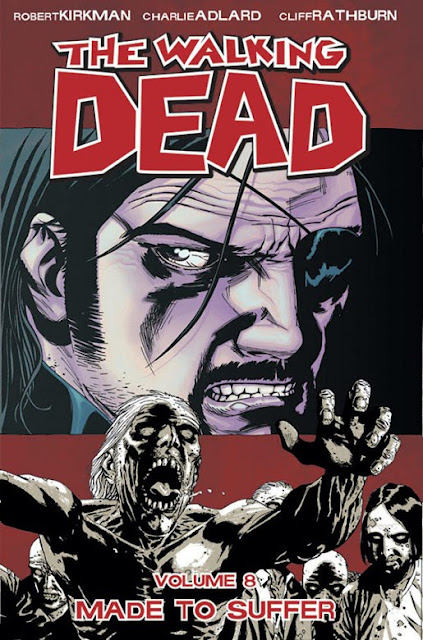 Yes, there’s a huge difference between Moore and Adlard, but as the series went on I kind of got to like Adlard’s stuff more and more. I find Adlard’s art to be a lot darker and straight to the point, even though Moore pays more attention to details. Dark is good.

I’m still in love with Flight of the Conchords.
They are elite.
Check out the first post as well.
We’re Both In Love With a Sexy Lady

In the midst of chaos we all need humour.
Flight of The Conchords is a HBO quality production based on a real life New Zealand comedy duo performing their music. They combine stupidity with cleverness and they’re always on point. In short: They’re incredibly funny. Just check the videos.

The humans are dead

Think about it (Live version)

>Television — the drug of the nation. I’m with that, but occasionally I hear from people I trust (die hard TV series professionals who watch every fuckin’ show there is) about some new amazing TV series and I download them and then watch with intense intensity.
I’ve come to worship Twin Peaks, Six Feet Under, The Wire, Epitafios, Riget and Carnivàle thanks to these die hards. As for The Office (UK) I’m just speechless. It’s just perfect in every sense. Still haven’t had the time to watch the American version, but I hear it’s damn good as well.

If you’re a fan of The Office you’ll hopefully enjoy this brilliant satire, featuring George W Bush, Tony Blair and the rest of the elite. All hail Supernews!
“Has U.S. politics become so absurd that it deserves it’s own cartoon show? Evidently, it has.”

>You know about Top Gear? I hadn’t even heard about that show until I stumbled upon these clips on YouTube a couple of days ago, but apparently there’s millions of trillions watching it, and it’s one of the most pirated shows ever. I never watch TV, so maybe that’s why I’m left in the cold when it comes to such high quality stuff as Top Gear.
Mind you, I have seen nothing but these three clips, so I might be totally out of it here, but I found them really funny. Three old goofballs trying to pimp their rides. So very much anti-bling-bling-MTV I just had to like it.
And I can relate to that evil shit that is caravan holidays as well. I was born and bred in a trailer park. Well, not really, but I’ve sure spent my fair deal of darkness on the road and in them bloody caravans. I think I hated every minute. The worst thing was going abroad and missing Rockbox.

Check these clips from start to finish, and then tell me I’m wierd. I find them funny. Am I getting old?