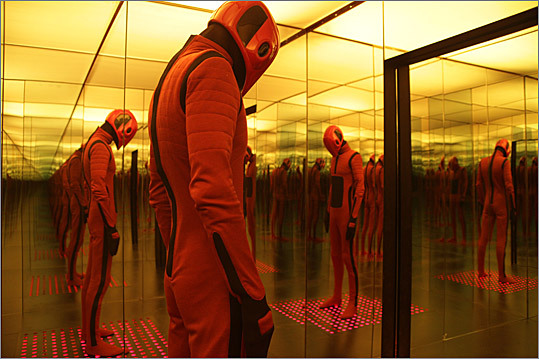 I just saw a movie that was right up my alley (thanks for the tip, Claudio Marino!). I won’t tell you much about it, I think it’s better that way. What you need to know is that Beyond the Black Rainbow is  a psychotronic kind of movie, where plot isn’t as important as aesthetics. This thing is beautiful! Along with the dark and brooding soundtrack (the main theme is obviously inspired by the masters: Goblin) it strives for perfection in the genre. Of course it has its’ flaws, but if you’re in the right mood: Crank up the volume and turn off the lights and this beast will hold you spellbound for almost two hours straight.

I feel the same vibe in movies like Inland Empire, The Limits of Control, Valhalla Rising, Eraserhead, Amer and maybe even Stalker, 2001: A Space Odyssey and some Cronenberg flicks. If you like that stuff, you’ll hopefully dig this one too.