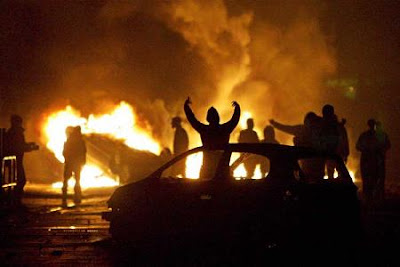 The vestiges of an integrated, socially cohesive, functioning society, with some kind of solidarity and continuity to it, have just been destroyed here. It’s hard to imagine a better way to demoralize people than to have them watch T.V. for seven hours a day – but that’s pretty much what people have been reduced to by now.
In fact, all of these things really illustrate the difference between completely demoralized societies like ours and societies that are still hanging together, like in a lot of the Third World. I mean, in absolute terms the Mayan Indians in Chiapas, Mexico [who organized the Zapatista rebellion in 1994], are much poorer than the people in South Central Los Angeles, or in Michigan or Montana – much poorer. But they have a civil society that hasn’t been totally eliminated the way the working-class culture we used to have in the United States was. Chiapas is one of the most impoverished areas of the Hemisphere, but because there’s still a lively, vibrant society there, with a cultural tradition of freedom and social organization, the Mayan Indian peasants were able to respond in a highly constructive way – they organized the Chiapas rebellion, they have programs and positions, they have public support, it’s been going somewhere. South Central Los Angeles, on the other hand, was just a riot: it was the reaction of completely demoralized, devastated, poor working-class population, with nothing at all to bring it together. All the people could do there was mindless lashing out, just go steal from the stores. The only effect of that is, we’ll build more jails.
[…]See, there’s an experiment going on. The experiment is: can you marginalize a large part of the population, regard them as superfluous because they’re not helping you make those dazzling profits — and can you set up a world in which production is carried out by the most oppressed people, with the fewest rights, in the most flexible labor markets, for the happiness of the rich people of the world?
[…]Can you have an economy where everything works like that – production by the most impoverished and exploited, for the richest and most privileged, internationally? And with large parts of the general population just marginalized because they don’t contribute to the system – in Colombia, murdered, in New York, locked up in prison. Can you do that? Well, nobody knows the answer to that question. You ask, could it lead to a civil war? It definitely could, it could lead to uprisings, revolts.

Isn’t that pretty much what happened in France in 2005 and 2007?
Here’s what the French duo Justice has to say about it, this is STRESS (boycotted by several TV-stations):