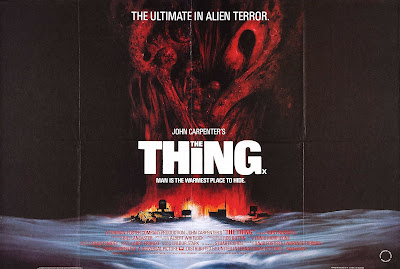 A science outpost at the South Pole, winter 1982. Unexplainable madness. Burnt human remains and melted bodies. A heavy storm. Alien mutations taking over and imitating the human body, leaving the few inhabitants scrambling in a paranoid, claustrophobic frenzy as they try to determine who’s infected and who’s not. Darkness descends. Extreme tension. Pretty soon it’s every man against every man – bellum omnium contra omnes – and within them: The ultimate in alien terror.

Reservoir Dogs (1992) and The X-Files got some massive inspiration here as well.

The Thing (1982) has got that lovely, cheesy 80’s feeling, like when the technical aspects of movie making just started to develop into more hi-tech areas, and when people not quite knew how to handle their new tools but used them anyway. The drug-induced social realism featured in many movies of the 70’s is replaced by a bit plastic colours and feelings, quite noticeable stylistically, but also musicwise and how the camera works and moves. It’s like people stopped thinking and let the machines do most of the work. In other words, the 80’s cheese is a bit stiff, but that’s the great charm about these fantastic movies.

None the less, The Thing is probably the most realistic among the ”mainstream” horror movies of the 80’s, or, for that matter, amongst mainstream horror movies over all. There are a lot of eerie scenes. The one where they find the sarcophagus made of ice, for example, or when blood is drawn from each man to determine who is infected… Very creepy! The editing and sound is amazing in these scenes, and the music, the dark heartbeat-like rhythms made by Ennio Morricone, is crafted for worship. Here are the sounds of isolation, paranoia and darkness.

As for the alien, still to this day I think it’s pretty cool. Not as professional as in Alien, but hey… Disfigured corpses melting into each other rule, and that’s a fact.

It’s not all gloom and doom, though. In the beginning, it’s actually quite funny.

The black dude on roller skates: ”Maybe we’re at war with the Norwegians?”

And MacReady, who simply cannot distinguish between Norway and Sweden, yelling ”Hey, Sweden!” as he enters the Norwegian outpost.

I believe this is the one movie that got me into horror and science fiction in the first place. I remember watching an old grimy VHS copy back in the 80’s, and now some 25 years later, I’ve got this awesome Blu-Ray edition. Both versions are cool, but if I could I’d mix the dirty picture quality of the VHS and the sound quality of the Blu-Ray, making it the ultimate ultimate in alien terror!

John Carpenter’s The Thing is a remake of Howard Hawks’ The Thing From Another World (1951). Sad to say, I still haven’t seen the original, although I own it. I guess I’m pretty stupid.

And now I hear there’s a prequel ready to launch in November 2011. We’ll see how that goes…

It’s gonna get a hell of a lot worse before it gets any better.

OTHER GREAT MOVIES OF THE 80’s: