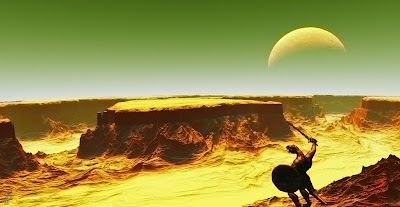 There was a prophet standing in the square with arms upheld in exhortation to the beggared multitude gathered there. A delegation of human ruin who attended him with blind eyes upturned and puckered stumps and leprous sores. The sun hung on the cusp of eclipse and the prophet spoke to them. This hour the sun would darken and all these souls would be cured of their afflictions before it appeared again. And the dreamer himself was caught up among the supplicants and when they had been blessed and the sun began to blacken he did push forward and hold up his and and call out. Me, he cried. Can I be cured? The prophet looked down as if surprised to see him there amidst such pariahs. The sun paused. He said: Yes, I think perhaps you will be cured. Then the sun buckled and dark fell like a shout. The last wirethin rim was crept away. They waited. Nothing moved. They waited a long time and it grew chill. Above them hung the stars of another season. There began a restlessness and a muttering. The sun did not return. It grew cold and more black and silent and some began to cry out and some despaired but the sun did not return. Now the dreamer grew fearful. Voices were being raised against him. He was caught up in the crowd and the stink of their rags filled his nostrils. They grew seething and more mutinous and he tried to hide among them but they knew him even in that pit of hopeless dark and fell upon him with howls of outrage.

Yes, it’s that Cormac McCarthy again. This time in the nightmarish Outer Dark, filled to the brim with scenes of horror, incest and murder, told with the biblical rhetoric I’ve come to love, telling tales of the depravity of human nature — the fundamental truth — like there is no tomorrow. 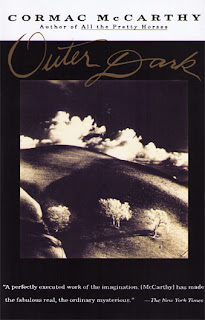 The above quote cites Culla Holme, one brother who shares an incestuous union with his sister. A baby is born out of this incest and Culla, claiming it is dead, brings the child to the woods and buries it alive. The woman soon discovers her brother’s lie and sets forth alone in search of her baby. The brother follows, looking for her. And thus begins the tale of aimless wanderings from one unimaginable horror to another.
Of course, it is a must read. The setting at times reminiscent of the one in Child of God — another McCarthy masterpiece — but in a different part of the world, in another Hell.

Woe to you, Oh Earth and Sea,
for the Devil sends the Beast with wrath,
because he knows the time is short…