The best releases are those that I’ve listened to for hours and hours and hours, and I still keep coming back. It just happened to be five tapes this time. It’s not a hipster thing, it’s a “great music”-thing. 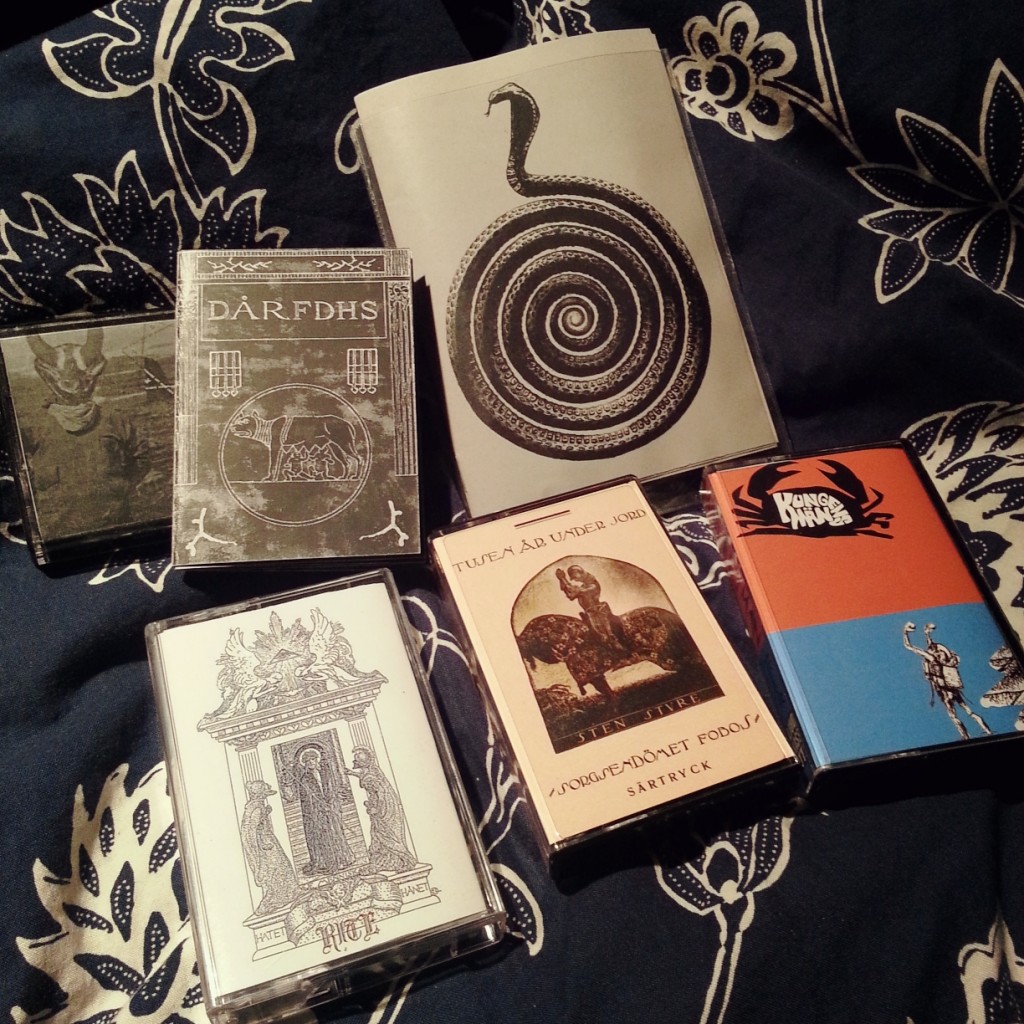 Tusen År Under Jord – Sorgsendömet Fobos (Hibiskofon)
This is the best stuff I’ve heard in years. When listening I think of really old black and white movies, surreal landscapes, dense forests in the north and inbreds worshipping elder gods in claustrophobic caves. This is sincere emotional melancholy, without asking for help or understanding. It just looms and breathes on its own. Twisted strings, weak organs and disturbing darkness lies ahead. Listen to this excerpt.
Dusa, another nice freak, was the first one to release a cassette on this promising small label. Make sure you check him out as well. It’s amazingly good stuff.

D.Å.R.F.D.H.S. – S/T (Funeral Fog Records)
The strange name Dard Å Rajn Från Det Hebbershålska Samfundet reads like a tribute to my favourite Swedish author Nikanor Teratologen. I got a bit worried when I realised this, cuz most of the times tributes to the man are childish rubbish. Not this time. This tape is a true masterpiece.
I’ve been stuck with old Cold Meat Industry CD:s and Segerhuva/Abisko tapes for so long I kind of got bored with the whole thing. I haven’t kept track of this ”new” wave of brilliant dark electronic stuff that’s been flooding the market. I still don’t keep track, so I just listen to this tape over and over again. It’s that good.
I’d say the foundation of D.Å.R.F.D.H.S. is a mixture of dark dirty ambient, experimental dub/techno, industrial soundscapes and northern isolationism. Listen here and make up your own mind.
I just got a hold of their brand new release, Det Stora Oväsendet LP (Clan Destine Records), as well as an additional 12” featuring five remixes of the album tracks. First spin = awesome shit from the vaults of Kågedalen/Blåsut. Get it. Now.
Also, make sure you check out Varseblivning (Blodörn) by Isorinne, one of the members of D.Å.R.F.D.H.S. (the other member being Varg).

Rite – Se menniskan, hatet, hånet
I wrote about Rite in 2011, being totally blown away by their very first songs. Since then they’ve kept me updated by regularly sending new stuff, and I’ve been blown away every time. This is black metal the way it’s supposed to be: genuinely original, spiritual darkness with religion as base. ”The feeling evoked by the art is everything”, as I wrote back then. This outstanding tape is no exception. This is divine black metal art. Listen.

Irkallian Oracle – Grave Ekstasis (Bolvärk)
Ritualistic death metal in the vein of the Australian cuckoo-clock freaks known as Portal, minus the technical exercises. This is doomlike, primal and grinding, and a bit more varied than Portal. Some stuff makes me think of Archgoat and Blasphemy, which is a very good thing. Apparently, this is a Swedish band, which makes my jaw drop even further down the spiral. This is Iconoclasm.

Kungens Män – Hissmusik (Ljudkassett!)
Shameless self-promotion. My band’s first release. Very happy with this one. And since April 2013 we’ve released one live album and five more concept albums (we’ll do one album a month for a whole year)… It’s that easy when you do 100% improvised stuff recorded straight to a wav-file in the rehearsal room.
If you think psychedelic, lenghty trips with a lo-fi vibe sounds interesting, check us out on Spotify, Bandcamp, iTunes and YouTube. It’s all for free.
Thanks.

Other releases that I found interesting (marked in red = a must!).
Probably missed out on tons of good stuff, as usual.