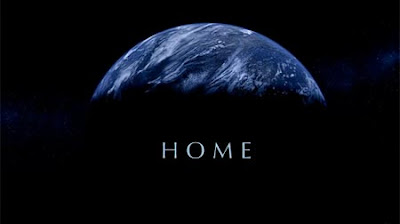 There are tons of propaganda movies telling us how bad we are and how good the Earth is. I like them all! They are proof of mankind’s stupidity, and pretty much proof that it’s way too late (this is probaly where I disagree with all those movies…).
Anyway, HOME by Yann Arthus-Bertrand is one of the better ones when it comes to pure and straight information. It’s available for free on YouTube and the website home-2009.com. It’s a scary movie — for real.

Since 1950, the world’s population has almost tripled, and since 1950, we have more fundamentally altered our island — the Earth — than in all of our 200,000 year history. Nigeria is the biggest oil exporter in Africa, and yet 70% of the population lives under the poverty line. The wealth is there, but the country’s inhabitants don’t have access to it. The same is true all over the globe. Half the world’s poor live in resource-rich countries. In 50 years the gap between rich and poor has grown wider than ever. Today half the world’s wealth is in the hands of the richest two (2!) percent of the population. This is the cause of population movements whose scale we have yet to fully realize.
The city of Lagos had a population of 700,000 in 1960.
That will rise to 16 million by 2025.
Deep down we all know this shit.
And you still have hope?
…I am the misanthrope.

3 thoughts on “>The Earth shall inherit the meek”