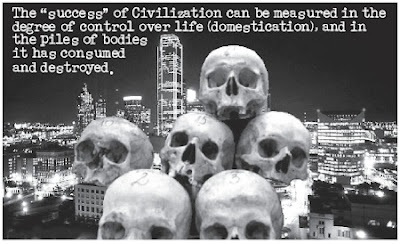 What will it take for you to finally call these last days what they really are: The end of the apocalypse.
The extermination of six hundred species per day? The starvation of one billion people?
Do you really  believe our culture will undergo a voluntary transformation to a sane way of living?

The problem is that we who benefit from the industrial economy – the civilization that must be destroyed in order for things to be created – are the ones that are destroying the planet, and we won’t accept having our benefits taken away from us. Our role as participants in the industrial economy is more important to us than being human, thus having our benefits taken away is like threatening our very existence. This is the downward spiral. This is why we’re doomed.

Lewis Mumford defined civilization’s main features as such: ”the centralization of political power, the separation of classes, the lifetime division of labor, the mechanization of production, the magnification of military power, the economic exploitation of the weak, and the universal introduction of slavery and forced labor for both industrial and military purposes.”
Most dictionaries define civilization as ”a high stage of social and cultural development, an advanced state of human society”.
Obviously, these two definitions don’t synch, and the dictionary definition makes the common mistake in presupposing our present civilization is the best, and that there is only one way to live. Oswald Spengler had a few things to say about that…

On another note: ”The civilized notion of ownership is in truth based on force: the aquisition and maintenance of the property of the rich is the central motivating factor impelling nearly all state violence.”
Because when speaking of ownership in a ”civilized” society we mean we have the right to do whatever we want with what we own. We have the right to destroy it, if we please. However, as Spengler also put it, with ownership comes responsibility. If the farmer owns and nurtures his land it becomes his blood and flesh, and he is responsible for the continuation of that land and its health. And he will take that responsibility. We’ve forgotten all about that in this civilized capitalist part of the world, where industrial economy and technology rule.

In Man and Technics (1931), Spengler predicted that coloured people of the Earth will use the very technology of the West to destroy the West. We’ll see how that goes…

One thought on “>The End of the Apocalypse”