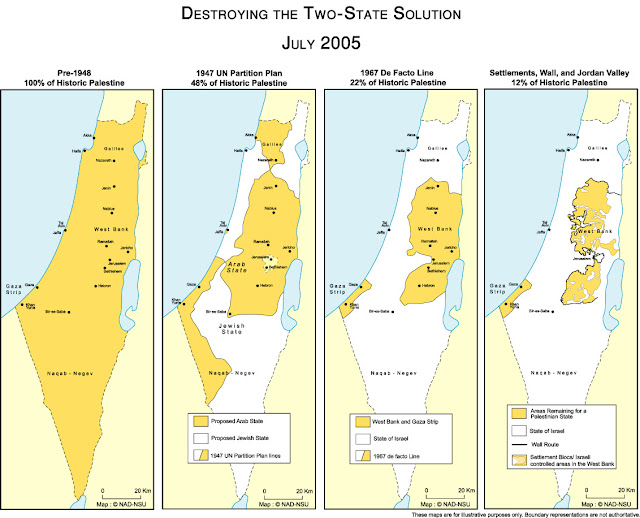 The Zionist cause becomes quite obvious when looking at this map. As I’ve stated here, the essence of Zionism is Jewish ethnic domination over Palestine, and by looking at this map you’ll see that the future of a two-state solution is virtually non-existent. Israel keeps expanding its settlements, no matter what the rest of the world thinks about such criminal behaviour.
As a reminder of the ugliness and stupidity of religion (read more about that here, here, here and here), the Christian Zionists, who are a significant political force in America, oppose the two-state solution, because they believe total Israeli control over Palestine will make it easier for Christ’s “Second Coming”… Holy fuck!

In short, there are three alternatives to a two-state solution. Each will be disastrous — for Israel, that is.

One: Abandon the Zionist vision of a Jewish state and let Palestinians and Jews enjoy equal political rights. This will never happen. There is no way that the Jewish people will agree to live as a minority in a state dominated by an Arab majority. Israel’s supporters in America will have no interest in this outcome.

Two: Israel expels all Palestinians in an act of ethnic cleansing, pretty much like what they did in 1948. This might actually happen, considering the recent Gaza massacre. They are so concerned about the survival of this Jewish state they’re capable of doing just such a sickening thing. However, the Palestinians will put up brutal resistance. There will be lots of blood. Will the West sit back once again? Probably so. This will be the absolute beginning of the end.

Three: Apartheid. This is the most likely outcome. The Arabs will be forced to live in small enclaves with limited autonomy, economically crippled and with no part in the political process. This is pretty much how things are right now.

Democracy in Israel won’t be tolerated, since the Arabs, who are the majority, would dominate its politics. 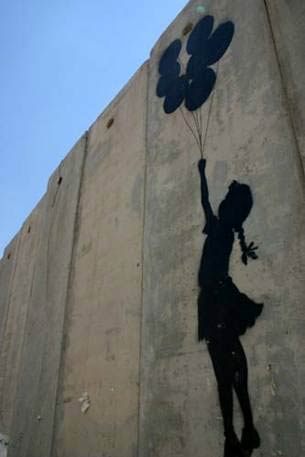 John Mearsheimer:
Imagine if the roles were reversed and a powerful Palestinian state was taking land away from Jewish inhabitants and brutalizing them in the process. There would rightfully be a storm of protest in the US and across Europe and tremendous pressure would be brought to bear on that Palestinian state to immediately cease exploiting the Jews and permit them to have a state of their own. But when Israelis colonize the West Bank and effectively turn Gaza into a giant prison for the Palestinians who live there, the US government not only does not protest, it backs Israel to the hilt. And that includes Barack Obama.

This article is based on John Mearsheimer’s talk in Oslo, October 5th 2009. The personal rants are all mine, though. John doesn’t seem to be a man of swear words…
Huge thanks to John for sending me the speech, both in English and in Norwegian.

Yesterday, Antiwar.com published the article The Israel Lobby, the Neocons, and the Iranian-American Community. It’s well worth reading.