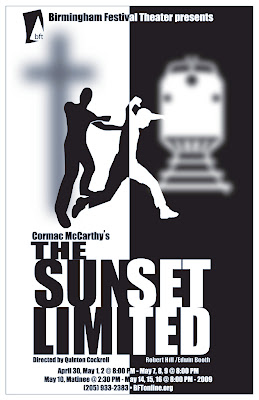 I dont regard my state of mind as some pessimistic view of the world.
I regard it as the world itself.
Evolution cannot avoid bringing intelligent life ultimately to an awareness of one thing above all else and that one thing is futility.

Cormac McCarthy’s play (which some people believe reads more like a novel) has been called “a poem in celebration of death”. I have yet to put my hands on anything by McCarthy that is nothing short of amazing, and The Sunset Limited is no exception.

However, I don’t find this play to be such an awesome literary experience as compared to Blood Meridian, for example, and that’s quite obvious since this is a play. Here is no Cormac painting pictures in your mind, here is none of that superb prose you’re used to, but here are these two men talking about the meaning and the meaninglessness of life, death, God, faith and other fairly intangible ideas, and that’s about it.

I didn’t know about this play until I found out about the movie adaptation. Starring Tommy Lee Jones as White and Samuel L. Jackson as Black, this is one tough battle for the human soul. In a way, these two dudes represent two extremes, and also, to be honest, two stereotypes. At least that’s what I make out of it. The black man being an ex-prisoner, a murderer, who found God in jail, and the white man being a professor and an atheist. That’s pretty stereotype, isn’t it? So, at times, the dialogue gets pathetic.

Black relies entirely on his faith in the Bible and White believes in Culture. Or believed, rather. Because apparently, White just tried to commit suicide. He has lost his faith in Culture and the human condition: “The things I believe in don’t exist anymore”. White has awoken to the real world around him, and the real world is evil. Interpreting the play in this way, I find it superb. It’s pretty much what I’ve been trying to say all along. Thus, I can cope with some parts being rather simple-minded. 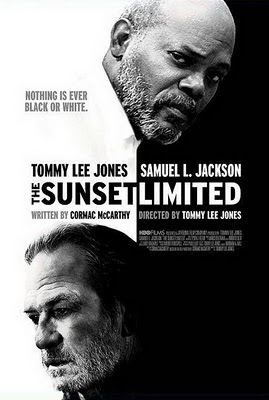 I yearn for the darkness. I pray for death. Real death. If I thought that in death I would meet the people I’ve known in life I don’t know what I’d do. That would be the ultimate horror. The ultimate despair. If I had to meet my mother again and start all of that all over, only this time without the prospect of death to look forward to?
Well. That would be the final nightmare. Kafka on wheels.

This is Cormac McCarthy without the surrounding mythos and tension and atmosphere. Also, he has left the territories he knows best: man in nature, the nature of the beast, the nature of man. A lot of true critics say he’s not working as well without the atmosphere and stuff, but I say fuck that shit… Sure, I’m a fanboy, and highly biased, but I think my mind is clear enough to say that this is some pretty good dope for the soul. The subjects he’s dealing with are pretty much the same as always, although in a more accepted way, so to speak. I think this dialogue speaks to more people than Blood Meridian, for example. The Sunset Limited is straight to the point, while Blood Meridian is almost occult and obscure in perspective.

As for the movie VS the play, I’d say I enjoyed the movie more (despite the bad editing). Maybe because I’m not used to reading plays and all, and I really like the acting of Tommy Lee Jones and Samuel Jackson.
As always, you decide.

Show me a religion that prepares one for death. For nothingness.
There’s a church I might enter.

One thought on “>The world itself”