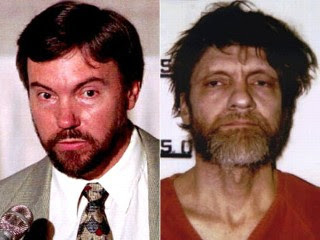 Had it not been for David Kaczynski’s wife, Linda Patrik, he probably wouldn’t have turned his brother in. She was the one insisting on David reading the manifesto, since David kind of lived in denial, obviously not wanting his brother to be the infamous serial killer the Unabomber.
In October 1995, when the Unabomber was very much in the news, David finally got to read the manifesto — almost one month after it had been published by the press.
“After I read the first few pages”, David recalled, “my jaw literally dropped”. He recognized the tone and feel, and remembered certain sentences from his brother’s letters. He went home immediately and dug out those old letters, dating fifteen years back, and found sentences identical to the ones in the manifesto, even with the same capitalization:
“The radical environmentalists ALREADY hold an ideology that exalts nature and opposes technology”.

When living in the wilderness Ted recieved money from his family. Suddenly it struck David and Linda that the Unabomber had performed several of his attacks shortly after the family had sent him money… Could it be that the family had funded murder?
David struggled with himself and finally came to the conclusion that the only way to find out if his brother was the Unabomber was to confront him. He wrote Ted a letter asking if he could visit him and recieved the following reply:
“I get just choked with frustration at my inability to get our stinking family off my back once and for all, and ‘stinking family’ emphatically includes you… I DON’T EVER WANT TO SEE YOU OR HEAR FROM YOU, OR ANY OTHER MEMBER OF OUR FAMILY, AGAIN.”

After letting a friend of Linda handing over some of Ted’s letters to the FBI — with names and adresses carefully removed, in case Ted wasn’t the Unabomber after all — they got the reply that there was a 60 to 80 percent chance of a match. The FBI somehow got to know David’s identity and soon realized it must be David’s brother who had written those letters and they quickly began surveillance in Lincoln, Montana, and on the morning of April 3, 1996, the SWAT team was in place ready to strike against the Unabomber cabin.

Ted said later of his brother that he was “another Judas Iscariot”, but ultimately Ted put most of the blame on Linda Patrik.