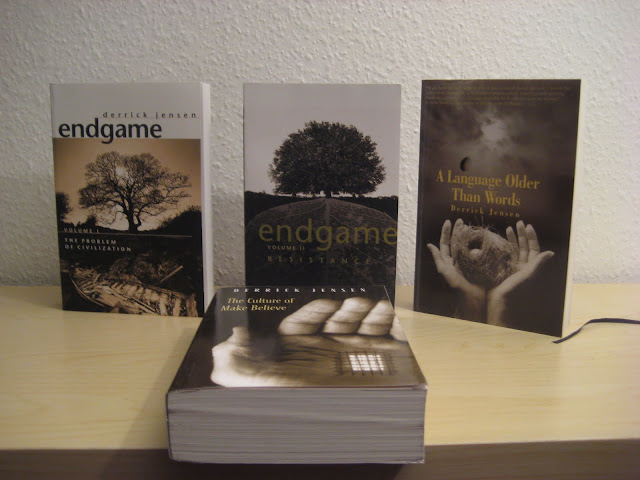 I just started reading Derrick Jensen‘s Endgame (thanks to Pierre) after having read bits and parts in A Language Older Than Words and The Culture of Make Believe. Here are the twenty premises of Endgame.

Premise One: Civilization is not and can never be sustainable. This is especially true for industrial civilization.

Premise Three: Our way of living—industrial civilization—is based on, requires, and would collapse very quickly without persistent and widespread violence.

Premise Four: Civilization is based on a clearly defined and widely accepted yet often unarticulated hierarchy. Violence done by those higher on the hierarchy to those lower is nearly always invisible, that is, unnoticed. When it is noticed, it is fully rationalized. Violence done by those lower on the hierarchy to those higher is unthinkable, and when it does occur is regarded with shock, horror, and the fetishization of the victims.

Premise Six: Civilization is not redeemable. This culture will not undergo any sort of voluntary transformation to a sane and sustainable way of living. If we do not put a halt to it, civilization will continue to immiserate the vast majority of humans and to degrade the planet until it (civilization, and probably the planet) collapses. The effects of this degradation will continue to harm humans and nonhumans for a very long time.

Premise Seven: The longer we wait for civilization to crash—or the longer we wait before we ourselves bring it down—the messier will be the crash, and the worse things will be for those humans and nonhumans who live during it, and for those who come after.

Another way to put premise Eight: Any economic or social system that does not benefit the natural communities on which it is based is unsustainable, immoral, and stupid. Sustainability, morality, and intelligence (as well as justice) requires the dismantling of any such economic or social system, or at the very least disallowing it from damaging your landbase.

Premise Nine: Although there will clearly some day be far fewer humans than there are at present, there are many ways this reduction in population could occur (or be achieved, depending on the passivity or activity with which we choose to approach this transformation). Some of these ways would be characterized by extreme violence and privation: nuclear armageddon, for example, would reduce both population and consumption, yet do so horrifically; the same would be true for a continuation of overshoot, followed by crash. Other ways could be characterized by less violence. Given the current levels of violence by this culture against both humans and the natural world, however, it’s not possible to speak of reductions in population and consumption that do not involve violence and privation, not because the reductions themselves would necessarily involve violence, but because violence and privation have become the default. Yet some ways of reducing population and consumption, while still violent, would consist of decreasing the current levels of violence required, and caused by, the (often forced) movement of resources from the poor to the rich, and would of course be marked by a reduction in current violence against the natural world. Personally and collectively we may be able to both reduce the amount and soften the character of violence that occurs during this ongoing and perhaps longterm shift. Or we may not. But this much is certain: if we do not approach it actively—if we do not talk about our predicament and what we are going to do about it—the violence will almost undoubtedly be far more severe, the privation more extreme.

Premise Ten: The culture as a whole and most of its members are insane. The culture is driven by a death urge, an urge to destroy life. 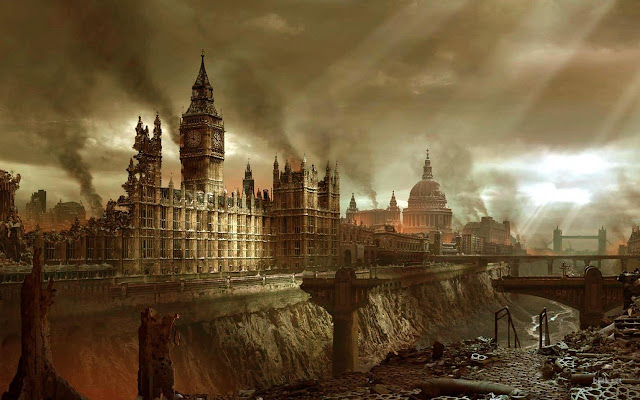 Premise Eleven: From the beginning, this culture—civilization—has been a culture of occupation.

Premise Twelve: There are no rich people in the world, and there are no poor people. There are just people. The rich may have lots of pieces of green paper that many pretend are worth something—or their presumed riches may be even more abstract: numbers on hard drives at banks—and the poor may not. These “rich” claim they own land, and the “poor” are often denied the right to make that same claim. A primary purpose of the police is to enforce the delusions of those with lots of pieces of green paper. Those without the green papers generally buy into these delusions almost as quickly and completely as those with. These delusions carry with them extreme consequences in the real world.

Premise Thirteen: Those in power rule by force, and the sooner we break ourselves of illusions to the contrary, the sooner we can at least begin to make reasonable decisions about whether, when, and how we are going to resist.

Premise Fourteen: From birth on—and probably from conception, but I’m not sure how I’d make the case—we are individually and collectively enculturated to hate life, hate the natural world, hate the wild, hate wild animals, hate women, hate children, hate our bodies, hate and fear our emotions, hate ourselves. If we did not hate the world, we could not allow it to be destroyed before our eyes. If we did not hate ourselves, we could not allow our homes—and our bodies—to be poisoned.

Premise Sixteen: The material world is primary. This does not mean that the spirit does not exist, nor that the material world is all there is. It means that spirit mixes with flesh. It means also that real world actions have real world consequences. It means we cannot rely on Jesus, Santa Claus, the Great Mother, or even the Easter Bunny to get us out of this mess. It means this mess really is a mess, and not just the movement of God’s eyebrows. It means we have to face this mess ourselves. It means that for the time we are here on Earth—whether or not we end up somewhere else after we die, and whether we are condemned or privileged to live here—the Earth is the point. It is primary. It is our home. It is everything. It is silly to think or act or be as though this world is not real and primary. It is silly and pathetic to not live our lives as though our lives are real.

Premise Seventeen: It is a mistake (or more likely, denial) to base our decisions on whether actions arising from these will or won’t frighten fence-sitters, or the mass of Americans.

Premise Eighteen: Our current sense of self is no more sustainable than our current use of energy or technology.

Premise Nineteen: The culture’s problem lies above all in the belief that controlling and abusing the natural world is justifiable.

Premise Twenty: Within this culture, economics—not community well-being, not morals, not ethics, not justice, not life itself—drives social decisions.

Modification of Premise Twenty: Social decisions are determined primarily (and often exclusively) on the basis of whether these decisions will increase the monetary fortunes of the decision-makers and those they serve.

Re-modification of Premise Twenty: Social decisions are determined primarily (and often exclusively) on the basis of whether these decisions will increase the power of the decision-makers and those they serve.

Re-modification of Premise Twenty: Social decisions are founded primarily (and often exclusively) on the almost entirely unexamined belief that the decision-makers and those they serve are entitled to magnify their power and/or financial fortunes at the expense of those below.

Re-modification of Premise Twenty: If you dig to the heart of it—if there were any heart left—you would find that social decisions are determined primarily on the basis of how well these decisions serve the ends of controlling or destroying wild nature.