“Nothing written for pay is worth printing.
Only what has been written against the market.”
Ezra Pound (1885–1972) once said of poetry: ”It is the dance of intelligence among words”. He dismissed most of the poetry he read as ”rethorical din crippled by painted adjectives and emotional slither”. His friend Wyndham Lewis, novelist and painter, wrote that Pound was ”a pedagogic volcano whose molten matter was language that seared through a tragic fracture in his personality, a broken seam of sensibility, releasing an uncontainable energy or an anger that could persist for thirty years”. Once, in Lewis’ Rebel Art Centre, Pound caused a stir when waving a flag that proclaimed ”The End of the Christian Era!”. He could never be fully trusted in polite society.
But Ezra Pound was a major figure in the modernist movement. He was its inspiration and, according to some, its sole establisher. Undoubtly, he was one of the immortals of poetry. 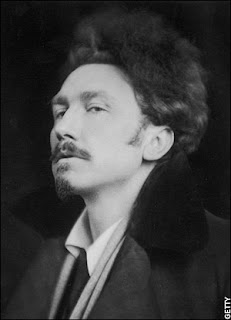 The years before World War I were very vital for Pound. He was occupied with his poetry, with journalism, with his work as editor of the journal Poetry, and with new writers like T.S. Eliot and James Joyce. When WWI exploded everything was shattered. Pound, recieving frontline reports from his friends, felt the best part of his generation had been ravaged by an absurdly wasteful war. Having begun his career with the studies of love poetry, now venom, antagonism and invective were to become equally important motivations for his own work.
He began to loathe Western civilization because it had no room left for its artists, and ”because it seemed systematically bent on its own extinction through warfare”. He hated the liberal modern state, where there seemed to be no strong leaders and where responsibility had become corrupted by insane bureaucracy. He also hated the influence of organized religion, and took as his models the two grand masters of hatred: Dante and Villon. He began to incorporate his anger and criticism in The Cantos, a booklenght long epic poem of 120 sections which was to become his lifework.

Pound, an American by birth, moved to London in 1908, and in 1921, dissatisfied with England after the war, he moved to Paris, and four years later to Rapallo, Italy. Here he became very interested in economics and he campaigned viciously against the Western banking system. He began to fear the preparations of yet another great war, ”a second instance of organized madness”, and he imagined Jews to influence political systems, the banking business and the weapon industries. He thought they would begin the next war to create a huge debt and new profits.
He began writing letters to American senators and congress men: ”Every man in high office is a thief’s accomplice”. He also campaigned against the obscenity laws affecting great literary works like James Joyce’s Ulysses. Of course, this was not a popular thing to do amongst the men of power. Even his closest friends began to protest against him. 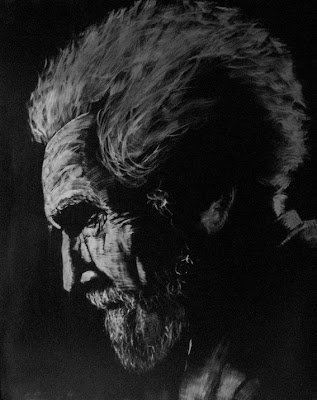 When World War II was a fact, Pound ventilated his feelings of anger in a series of broadcasts on Italian State Radio where he – besides speaking of cultural matters — defended fascism, savaged America and incorporated what most would call anti-Semitism in his denunciations of the war. His radio rage was monitored by the FBI, and in 1943 he was arrested for treason by the United States government. He was incarcerated and isolated for three weeks in a very small wire cage, subject to broiling sun and searchlights all night. He was interrogated in an U.S. Army detention center where they usually dealt with troops who had raped civilians or disobeyed their officers. No one was allowed to talk to him, not even the guards, and from his gorilla cage he witnessed several inmates being shot to death in escape attempts. Finally, after weeks of fear, he ”believed something snapped” in his head, and he ”suffered a nervous breakdown”.
In Washington he defended his action as a ”protest against a system which creates one war after another, in a series and in system”. He refused to admit he’d been wrong.
Treason is punishable by death, and the U.S. government now faced a dilemma: Wouldn’t it be embarrassing if one of the world’s leading democracies executed one of its leading writers? But why should an artist deserve special treatment, even if he had contributed more than most to the general cultural level of the times?
The solution was to declare him insane. 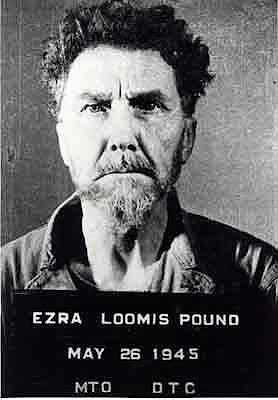 In 1946 he was sent to what he called the ”Hell-hole”, a ward for lunatics in St. Elizabeths in Washington, D.C., an insane asylum where he was to be kept for the next twelve years of his life, from age sixty to seventy-two. He spent twelve years in the company of screaming men in straitjackets. Despite his suffering he continued writing The Cantos, which he had been working on since 1915. Now the themes of economics, governance, and culture were integral to its content. He also translated the Confusian classics while being held prisoner in this lunatic asylum.

He was often visited by a Library of Congress researcher named Eustace Mullins. Pound commissioned Mullins to write a book about the history of the Federal Reserve, which resulted in Secrets of The Federal Reserve. Pound believed that the bankers in charge of the Federal Reserve and their associates in the Bank of England were responsible for getting the United States into both World Wars, in an effort to drive up government debt beyond sustainable levels. He claimed that bankers hide behind the screen of the central banks and pull political strings to drive countries into the war, creating immense profits for themselves as the principal beneficiaries of wartime debt. Pound advocated an abandonment of the current system of money being created by private bankers.

“Wars are made to make debt.”

Released in 1958 after pressure from T.S. Eliot, Ernest Hemingway and Robert Frost, writers he had helped as critic and editor, he returned to Italy where he gave in to despair and depression. For the last ten years of his life he almost stopped writing and speaking, the man who had spent all his life doing just that: raging against the system in the name of poetry. The releaser of words spent his last ten years wordless. He died in 1972, two days after his 87th birthday, in Venice where he is buried. 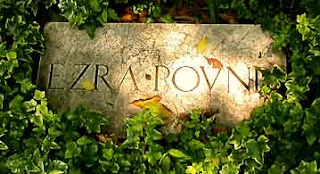 The Cantos was never finished, but is nevertheless published. Still, along with the 794 pages long A Companion to The Cantos of Ezra Pound I don’t understand much at all… Even scholars claim that The Cantos is an extreme piece of work, and it is said that Pound himself got depressed when realizing he’d spent most of his life writing a poem few people would understand. What I understand, though, is that The Cantos is the work of a genius. 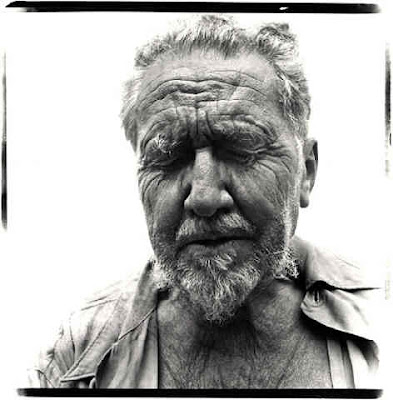 “I did not enter into silence, silence captured me.”

Besides being a poet, critic, author, journalist and editor, Pound was also a translator and composer. In Paris he composed two complete operas and several pieces for solo violin. Pound’s first radio opera, transmitted in October 1931 under the title The Testament of François Villon, was one of the first electronically enhanced operas to be broadcasted in Europe.
Personally, I have no understanding at all for this thing they call opera, but you may listen and judge for yourself at Amazon. More info at ezrapoundmusic.com.