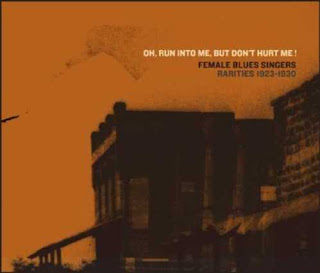 I’ve never been a fan of blues music. I like the stories that surround the genre, and I like that distinct bad sound quality of really old blues tracks, but when thinking of blues I think of wining men repeating themselves over and over again… And you know people who say all reggae sounds the same? That’s what blues is like to me. It all sounds the same.
But this weekend I passed that treshold of ignorance and realized it’s not like that at all. I’m still no big fan of blues, though. I own one single record and that’s it. No mpthrees, no movies, no books, nothing but that cd I bought this weekend. 24 tracks all sung by female blues singers. Yep, that’s right, female blues singers from way back in the 1920’s. I hardly even knew they existed, to tell you the truth.
Because things were quite different 90 years ago, especially on the gender role front. Women’s rights were a total joke and racism and discrimination was the normal state of the day; especially in the music business, and, I guess, especially in the blues business. Imagine being a black woman singing the blues then… What did people think about their stuff back then? How were they marketed to the public, if at all? How many copies were made? How many were sold? How are people able to find these ultrarare, superobscure recordings? There must be some mad stories to tell here.
However, many of these artists only recorded one song and for the most part there’s no information whatsoever to be found about them. Still most of these tracks are filled with so much emotion. Seems like many of them worked at carnivals, touring the vaudeville circuit. Some accompanied silent films. Still, there must be stories to tell. There are stories everywhere.

I found it strangely mesmerising listening to these old vocal ghosts (especially right before falling asleep at night). These women are wining and crying about just the same things that the men usually wine about, but from a woman’s perspective of course. In other words, they’re just as miserable as the men (Oops!). The title alone says it all: Oh, run into me, but don’t hurt me! A craving for sex, lust and feelings, ”between crudeness and despair” as stated in the liner notes.

Now you’re layin’ up in my bed, between my two white sheets
I can’t see and smell nothin’, but your doggone feet
And I’m thru, tryin’ to make a man of you
And if you can’t bring a job don’t you look for your daily stew

I worked hard from Monday until late Saturday night
And you’re a dirty mistreater, you ain’t treatin’ me right
And I’m thru, cookin’ your stew and beans
And you’re a dirty pot hound, dirty as any man I’ve seen
Lucille Bogan, Pot Hound Blues (1929)

Did some google work and found that the Document label has released 14 CD’s that includes the complete output of obscure classic female blues singers from the 1920s/early ’30s. Well, the one I got is enough for now, but if I get hooked I guess this wiki article will keep me busy for a while. Always exploring, too much is never enough.
You may listen to samples of the songs at the Allmusic site.

One thought on “>Female blues singers — The vocal ghosts”