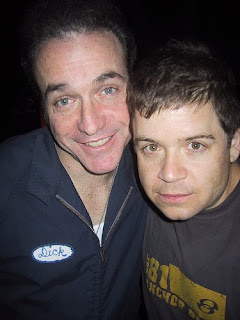 One of these guys is Jim Goad. Guess who.

Jim Goad has been challenging the status quo of humanity and everyday stupidities for aeons. He’s probably most (in)famous for his and his late wife’s fanzine ANSWER Me!, where the fourth issue is known as “The rape issue”. The article “It’s a rape, rape, rape, rape, rape, rape world” can be read here (PDF).
As always, people judge the book by its cover. As always, people are wrong (I come to think of the awesome band Today Is The Day and the song title The cold harshness of being wrong throughout your entire life…). Most often it’s peoples’ own prejudice and ignorance that stands in their way of rational thinking and simple understanding. That’s why they’re living fake lives. There’s no time for understanding in these peoples’ lives, cuz there are TV shows to watch and shit to be bought. Exhume to consume.
Don’t let the truth anywhere near me, you crazy bastard! I ain’t got time for no truth, boy!

I’m interested in Goad’s truths, because I believe he’s got some in stock. The truth is one ugly motherfucker, but ugliness is not something we’d like to be acquainted with, so we choose the easy way out. Goad tends to choose the hard way. Always the hard way. And when you like it hard, you’ll be looked down upon with suspicion by Them ‑the evil minds that plot destruction, sorcerers of death’s construction…

Now check these quotes from various interviews and columns, straight out the mouth of this unholy Goat.

Many of the racial problems in America are caused by the fact that people are innately tribal, and politicians know how to exploit that biological fact. And since power is built on money, it is in politicians’ best interest to fan racial unrest—even when it’s done under the guise of anti-racist touchy-mushy let’s‑all-hold-hands propaganda, because anti-racism still keeps everyone’s attention fixated on race—to divert attention away from financial inequities. They do this because they know that it works.

[…]
I tried to make it clear in The Redneck Manifesto that it’s unwise to ask a sociopath for advice about running society. I do think it’s ironic that people are more worried about words such as “nigger” than they are about the fact that most of the nation, black and white, is being squashed down into an abject, powerless peasantry whose government treats them all like prison inmates. But hey, it’s OK—even though our standard of living is shit compared to a generation ago, at least we don’t say “nigger” no mo’.

[…]
Back in ’95, when the District Attorney of Billingham, Washington, took a pair of newsstand owners to trial for selling ANSWER Me! #4, it was truly surreal to see layouts from my magazine blasted onto a white wall with an overhead projector. “Basically, it tells you how to rape everyone”, the DA told the jury. It’s always unsettling when a stranger seems certain of your intentions and motivations, when they couldn’t be further from the truth. This sense of anguish is heavily compounded when the stranger in question has the power to destroy your life.

[…]
This whole idea of someone objectively “deserving” punishment for their actions is an antiquated, pseudo-biblical concept and almost entirely foreign to me.

[…]
The Ebola virus and similar detergent products underpin what we’ve always said in ANSWER Me!: The best humanity can hope for is to be eventually crushed by nature.

[…]
In my writing, I try to focus on things which seem obvious to me, but about which society is rampagingly hypocritical.

[…]
I tend not to hold accidents of birth against people. I am much more attuned to willful decisions people make than skin color or genitalia. How do they deal with you one on one? How ethical are they?

[…]
Any monotheistic religion is years behind any religion the East came up with. Apparently monotheism is one of the building blocks of modern society. I think the Hindus, Buddhists and Dhaoists are all light years ahead of Western religion.

[…]
I remember when the Oklahoma City bombing happened, everyone immediately thought it was at the hands of Arabs. Wait a second. There are Americans so disgruntled that they blow things up? That was an exciting idea.

[…]
Every black guy who was in my cell said he respected nazis and no one else because they presume everyone is tribal and everyone is a racist. They know where they stand with the nazis. They’re not going to stab them in the back. They will stab them while looking at them, which is preferable.

[…]
I think we all know what is wrong with us. The question is — Do you have the bravery to confront it?

[…]
You are not better because you are a black woman. You’re a human being. You are just as bad as I am. That’s egalitarian. These people who claim to be anti-sexist and anti-racist are sexist and racist. I don’t see equality in intellectual aptitude but everybody is prone to be an asshole. That’s the only equality I know of.

[…]
Nothing that humans do surprises me but the way they tend to cover it up is what repels me.