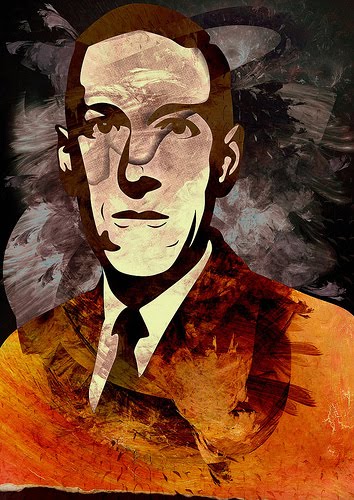 When reading Michel Houellebecq‘s fantastic discussion of H.P. Lovecraft in Against the World, Against Life, I browsed the web for further information and thus stumbled upon one of the best articles ever written about one of my favourite authors. Of course, it was written by Houellebecq…
The link.
The text:

Life is painful and disappointing. It is useless, therefore, to write new, realistic novels. We generally know where we stand in relation to reality and don’t care to know any more. Humanity, such as it is, inspires only an attenuated curiosity in us. All those prodigiously refined notations, situations, anecdotes … All they do, once a book has been set aside, is reinforce the slight revulsion that is already adequately nourished by any one of our “real life” days.

Now, here is Howard Phillips Lovecraft (1890-1937): “I am so beastly tired of mankind and the world that nothing can interest me unless it contains a couple of murders on each page or deals with the horrors unnameable and unaccountable that leer down from the external universes.” We need a supreme antidote against all forms of realism.

Those who love life do not read. Nor do they go to the movies, actually. No matter what might be said, access to the artistic universe is more or less entirely the preserve of those who are a little fed up with the world.

As for Lovecraft, he was more than a little fed up. In 1908 at the age of 18, he suffered what has been described as a “nervous breakdown” and plummeted into a lethargy that lasted about 10 years. At the age when his old classmates were hurriedly turning their backs on childhood and diving into life as into some marvellous, uncensored adventure, he cloistered himself at home, speaking only to his mother, refusing to get up all day, wandering about in a dressing gown all night.

What’s more, he wasn’t even writing.

What was he doing? Reading a little, maybe. We can’t even be sure of this. In fact, his biographers have had to admit they don’t know much at all, and that, judging from appearances – at least between the ages of 18 and 23 – he did absolutely nothing.

Then, between 1913 and 1918, very slowly, the situation improved. Gradually, he re-established contact with the human race. It was not easy. In May 1918 he wrote to Alfred Galpin: “I am only about half alive – a large part of my strength is consumed in sitting up or walking. My nervous system is a shattered wreck and I am absolutely bored and listless save when I come upon something which peculiarly interests me.”

It is definitely pointless to embark on a dramatic or psychological reconstruction. Because Lovecraft is a lucid, intelligent and sincere man. A kind of lethargic terror descended upon him as he turned 18 and he knew the reason for it perfectly well. In a 1920 letter he revisits his childhood at length. The little railway set whose cars were made of packing-cases, the coach house where he had set up his puppet theatre. And later, the garden he had designed, laying out each of its paths. It was irrigated by a system of canals that were his own handiwork, its ledges enclosed a small lawn at the centre of which stood a sundial. It was, he said, “the paradise of my adolescent years”.

Then comes this passage that concludes the letter: “Then I perceived with horror that I was growing too old for pleasure. Ruthless Time had set its fell claw upon me, and I was 17. Big boys do not play in toy houses and mock gardens, so I was obliged to turn over my world in sorrow to another and younger boy who dwelt across the lot from me. And since that time I have not delved in the earth or laid out paths and roads. There is too much wistful memory in such procedure, for the fleeting joy of childhood may never be recaptured. Adulthood is hell.”

Adulthood is hell. In the face of such a trenchant position, “moralists” today will utter vague opprobrious grumblings while waiting for a chance to strike with their obscene intimations. Perhaps Lovecraft actually could not become an adult; what is certain is that he did not want to. And given the values that govern the adult world, how can you argue with him? The reality principle, the pleasure principle, competitiveness, permanent challenges, sex and status – hardly reasons to rejoice.

Lovecraft, for his part, knew he had nothing to do with this world. And at each turn he played a losing hand. In theory and in practice. He lost his childhood; he also lost his faith. The world sickened him and he saw no reason to believe that by looking at things better they might appear differently. He saw religions as so many sugar-coated illusions made obsolete by the progress of science. At times, when in an exceptionally good mood, he would speak of the enchanted circle of religious belief, but it was a circle from which he felt banished, anyway.

Few beings have ever been so impregnated, pierced to the core, by the conviction of the absolute futility of human aspiration. The universe is nothing but a furtive arrangement of elementary particles. A figure in transition toward chaos. That is what will finally prevail. The human race will disappear. Other races in turn will appear and disappear. The skies will be glacial and empty, traversed by the feeble light of half-dead stars. These too will disappear. Everything will disappear. And human actions are as free and as stripped of meaning as the unfettered movement of the elementary particles. Good, evil, morality, sentiments? Pure “Victorian fictions”. All that exists is egotism. Cold, intact and radiant.

Lovecraft was well aware of the distinctly depressing nature of his conclusions. As he wrote in 1918, “all rationalism tends to minimalise the value and the importance of life, and to decrease the sum total of human happiness. In some cases the truth may cause suicidal or nearly suicidal depression.”

He remained steadfast in his materialism and atheism. In letter after letter he returned to his convictions with distinctly masochistic delectation.

Of course, life has no meaning. But neither does death. And this is another thing that curdles the blood when one discovers Lovecraft’s universe. The deaths of his heroes have no meaning. Death brings no appeasement. It in no way allows the story to conclude. Implacably, HPL destroys his characters, evoking only the dismemberment of marionettes. Indifferent to these pitiful vicissitudes, cosmic fear continues to expand. It swells and takes form. Great Cthulhu emerges from his slumber.

To be continued in this article…

4 thoughts on “>Lovecraft and Houellebecq”