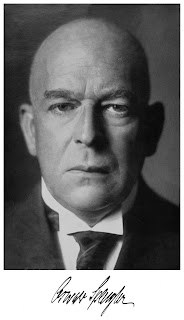 In a time and age when it’s frowned upon when people take their arts seriously, when irony rules, when the norm is not to care and the attention span of the average fuck up is no longer than three seconds – it is the age of arts, morals and politics in decline – it’s good to know there are still people who are the exact opposite. People who are dedicated, solemn, severe…

As for Oswald Spengler‘s analogy when dividing cultures into seasons, where spring is the birth of religion and where the basics of this culture is being formed, in June 2007 I wrote this about winter: ”Politics is motivated by money and moves through imperialism. Science no longer reaches certainties. There is much cultural confusion. The arts do not speak from or to the soul of the people, but rather follow materialistic fashions with lots of changes in styles, not asking much from neither the artist nor the people. After a moment of atheism the people will turn to a renewal of religion and spiritual faith, based on the religion developed in the spring of the culture.”
Full article here.

For me, music is a way to gain strenght. Not always, but most often.
Here are some songs that move me in different ways. It’s songs that have a certain weight to them, and I guess what they have in common is the stunning dedication to the cause (be it just the music, something of spiritual importance, or whatever), and with that comes a very powerful performance. Many times the lyrics are as important as the music and the visuals. In fact, most of the times the lyrics are what really matters, and when there are no lyrics and the music still moves me, that’s when it really hurts, and that’s when it’s for real. You don’t hear that very often nowadays.

EDITED THIS POST BECAUSE ALL THE TUBES SLOWED DOWN WHOLE UNIVERSE…