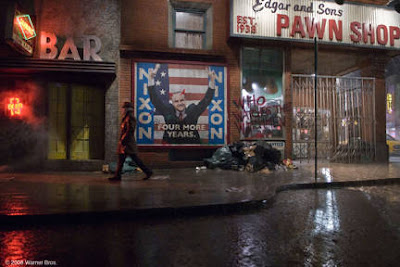 99 times out of 100 the book is better than the movie. The book gives you the insight and depth, whereas the movie brings the visuals, the surface. The Watchmen comic book is the creation of Alan Moore (author) and Dave Gibbons (artist). The Watchmen movie is directed by Zack Snyder. Claudio Marino comments on my earlier Watchmen post: ”A friend of mine said that Snyder has made an adaptation of Gibbon’s part, not Moore’s”. I totally agree with that. Still, I enjoyed watching Watchmen. A lot.
Having read the book at least three times in a short period of time just before seeing the movie was a good thing to do. I knew every part. And my jaw dropped to the floor when faced with what Snyder has created. It was awesome seeing the comic book come to life in a frame-by-frame way. So many details! I guess I missed 90% of all the stuff going on in the background, but when it’s released on Blu-ray I’ll catch up. 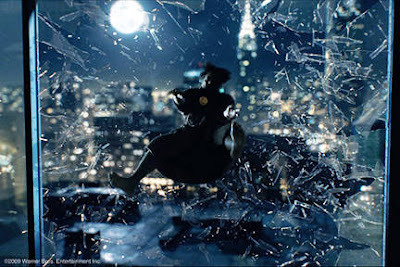 However, everything CGI is pretty much crap, especially when they’re on Mars. And the sex scenes and some of the fight scenes are very dull and could’ve been made a whole lot better (Speaking of sex, I noticed that Dr. Manhattans cock is way larger in the movie. You digest that for a second… *insert smiley here* )
As for the fight scenes I had expected more ”normal” stuff, not The Matrix fighting. I mean, only Dr. Manhattan is supposed to have real superpowers, right? The whole thing with the superhero story is that it’s ordinary people doing what superheroes do, but in a realistic way. Saying that, I think the movie focuses on the superhero thing too much. In my opinion the book is not at all about superheroes…

The casting is good, but again – only on the visual side. The actors look like they do in the comic book, but that’s pretty much it. I cannot feel the characters as much as I do in the book, with one exception: Rorschach! Hail Jackie Earle Haley! He’s definitely spot on. The rest of the actors are pretty much meaningless, soulless (so I guess Billy Crudup playing Dr. Manhattan does a good job after all…).

The music is quite different than expected (I chose not to read reviews before watching this one, so I didn’t know anything about the music); Jimi Hendrix, Leonard Cohen, Simon and Garfunkel, Bob Dylan… Sure, there are references to Dylan’s lyrics and such in the book, but I’m not sure if the actual music fits. I like the songs, but nah… It felt strange. I laughed at the Apocalypse Now reference in Vietnam, though. 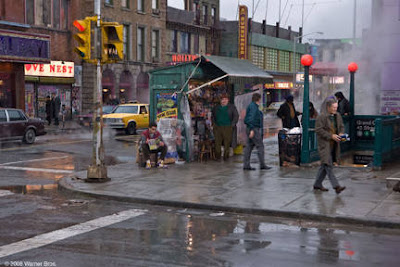 So, the visual take on Snyder’s Watchmen deserve applause. But Alan Moore, who has always hated his stories turned into movies (check the end of this article), will definitely hate what Snyder has done. There’s no depth to be found. Whereas the comic book takes on so many different aspects of story telling (the news vendor, the kid reading the comic book about pirates, the gay cab driver and her activist girlfriend, The New Frontiersman, the imaginary books and articles, the in-depth dialogue about politics and philosophy…), the movie mostly focuses on the visuals and the superheroes. In the comic book characters working in the background take on leading roles (for example, the pirate story becomes part of the narrative), and the level of details and depth is simply amazing. That’s what makes the book so fascinating. The importance of all these techniques and characters is pretty much left out in the movie.
Also, changing the ending was not a good move.

All in all, I still rate Watchmen 4 out of 5. It’s the best adaptation of a comic book so far and it is very well put together. 2 hours and 45 minutes went in a rush. I’m really looking forward to the Blu-ray release which hopefully will bring extended scenes, audio commentaries, documentaries, behind the scenes…
I’ll be checking out Watchmen: The Complete Motion Comic and Watchmen: Tales of The Black Freighter as well. Read about those releases here.

Below, a Watchmen viral.

2 thoughts on “>Some thoughts about Watchmen the movie”