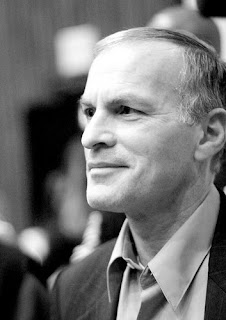 Sunday is a good day for blasphemy, because that’s when the Lord of Lies, Christ, hateful master, is asleep…
One of the most blasphemic scholars out there is without a doubt Norman Finkelstein. Of course, he is one of my heroes (check his webpage here). I admire him for his rational and logical thinking, his straight-forward approach, courage and honesty regarding the Holocaust industry, and his amazing accuracy when it comes to dissecting his opponents arguments. For he has many, many opponents. Israel imposed a 10-year ban on him, just to pick an example.

One of the most important books of present time has got to be The Holocaust Industry: Reflections on the Exploitation of Jewish Suffering. In part because of its content, obviously, but also because the controversy following its release (the Israel lobby in full effect). Here’s an interview with the man. The host is a dick, almost ruining the interview ranting about irrelevant crap, but these clips are well worth watching anyway.

And to make things even more blasphemous, here’s Finkelstein honouring the Hezbollah.

In his other book, Beyond Chutzpah: On the Misuse of Anti-Semitism and the Abuse of History, he talks about the Israel-Palestine conflict. He claims the controversy surrounding the conflict is due to people wanting to divert attention from, and sow confusion about, the documentary record.
The mainstream version, put forth by Israeli officials and written about in scholarly literature, was that Palestinians left during the 1948 war after Arab leaders, primarily via radio broadcasts, ordered them to clear the field for invading Arab armies. However, this was proven false in the late 1980’s (also see the post The New Historians).
Today most of the scholars agree that the Palestinians suffered an ethnic cleansing in 1948, although there are ongoing debates every day about whether or not this ethnic cleansing was systematically planned (the Holocaust Part 2…).
In the book he also shows how U.S. Media tend to attach greater credibility to information from representatives of the Israeli state than from Human Rights Watch, an independent nongovernmental organization. Israel’s real human rights record is virtually nonexistent… Why do media block out reality? You digest that for a second.
See also the posts about media here, here, here and here.

Finkelstein also talks about how Israel plays The Holocaust and New Anti-Semitism cards to sow confusion about the real historical record and to discredit criticism of Israeli policy. Each new Arab/Muslim leader threatening Israel is Hitler reincarnate, and the threat is routinely compared to The Holocaust… At the same time the Holocaust industry intones that The Holocaust was unique and any comparison between it and other crimes is a form if Holocaust denial… Whenever Israel comes under international pressure to resolve its conflict with the Palestinians in a diplomatic way, there will for sure be an extensive campaign saying that the world is facing a new anti-Semitism. The perpetrators are turned into the victims, putting the spotlight on the suffering Jews today, rather than on the suffering Palestinians…
It should be obvious that if the hostility to Jews has increased it has everything to do with Israel’s ruthless policies, and the best remedy would be for Israel to end the occupation.
The racist Zionist Apartheid regime must be abolished. 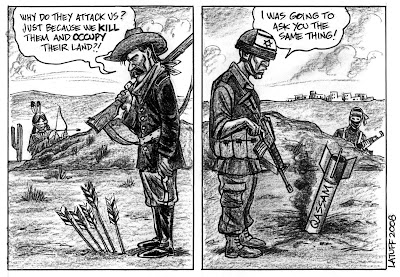 Click here for an interview with Finkelstein in an Amnesty blog