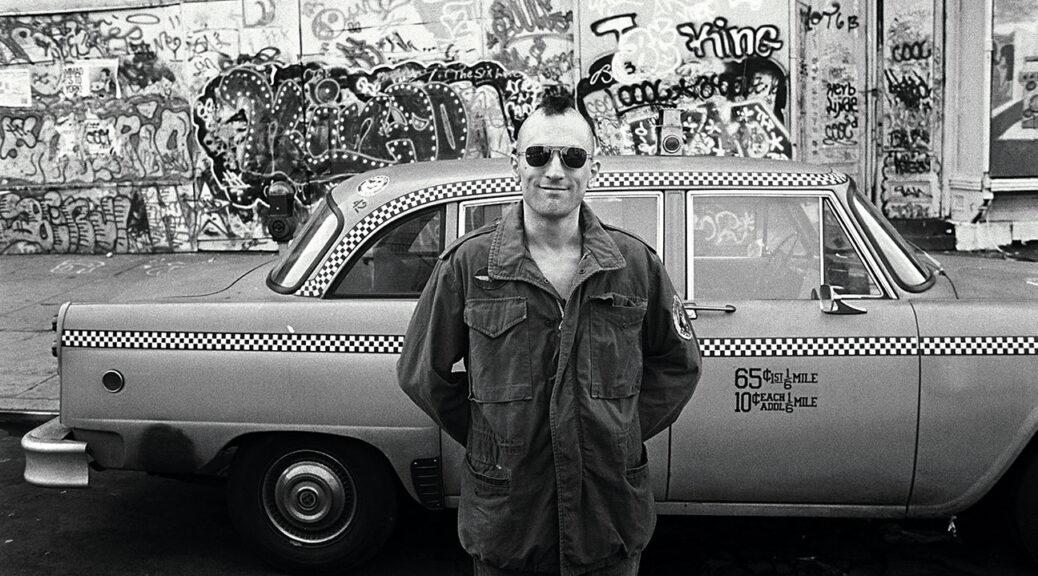 This article was originally published June 1, 2009.

I stumbled upon this man who at the age of 37 still hadn’t seen Taxi Driver. That, and the fact that I hadn’t seen any really good movies lately, was what got me going. So I tried this experiment: I watched Taxi Driver at night, in a quite zonked out state of mind, a couple of times (four or five times actually) and wrote down some stuff inspired by the vibe, the audio commentaries and the state I was in. Here’s what came out of that experience. 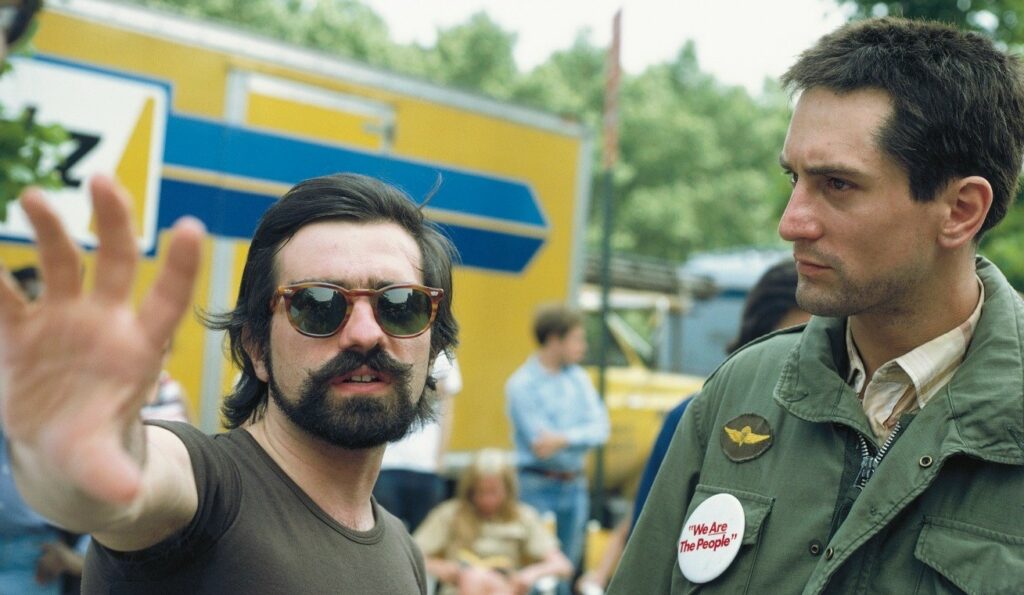 Taxi drivers are the real ears and eyes of the city and this movie is about a disconnected taxi driver, a former Vietnam veteran, who travels through a sick and venal world, a corrupt and dirty New York City, on his way to self-destruction and insanity. In the movie we’re able to glimpse into the soul of a man in pain, how he sees life and how he arrives at his decisions. As a taxi driver he’s completely surrounded by people, yet he’s completely alone. He looks through the window of civilization, but cannot really get inside.

”I don’t believe that one should devote his life to morbid self-attention”. But that’s exactly what he’s doing, and this behavior reinforces his own doomed condition. The girl he wants he cannot have (Betsy). The girl he can have he doesn’t want (Iris). ”Here is someone who stood up”, says the loner, the outsider, the loser… In front of the mirror he thinks he’s John Wayne, when in reality he’s more like Norman Bates. We all have these feelings that Travis has, but most of us never cross the line.

Loneliness and racism
In the original script there were a lot of passages about loneliness, but in the final script much of this has been left out. That’s because we see that loneliness. We see it every time we see that cab. If an actor can show you loneliness it’s much better than if he talks about it.

Schrader, before writing the script, had some experiences in his real life that kind of spawned the story of Taxi Driver. His marriage was destroyed, he’d broken up with his girlfriend, he had no money and he had no place to live, so he was just drifting around not knowing what to do. He realized he hadn’t talked to anyone for weeks, and the metaphor of the taxi driver occurred to him as a metaphor for loneliness. Kind of like a male, drifting loneliness. I think this is perfectly shown in the film, the slow motion sequences makes it almost like a documentary of the mind of a loner.

Travis’ inability to have a relationship with people is extremely frustrating to watch. When he tries to talk to people it always comes off awkward and he’s told to get away. He’s always trying to understand what people are saying and he always responds in a paranoid way. The little bits of paranoia we all feel from time to time becomes the entire world for Travis. He’s always pursued by some kind of threatening behavior. The people may not trying to get at you, but for him they are. The dream is real. The fantasy becomes reality. 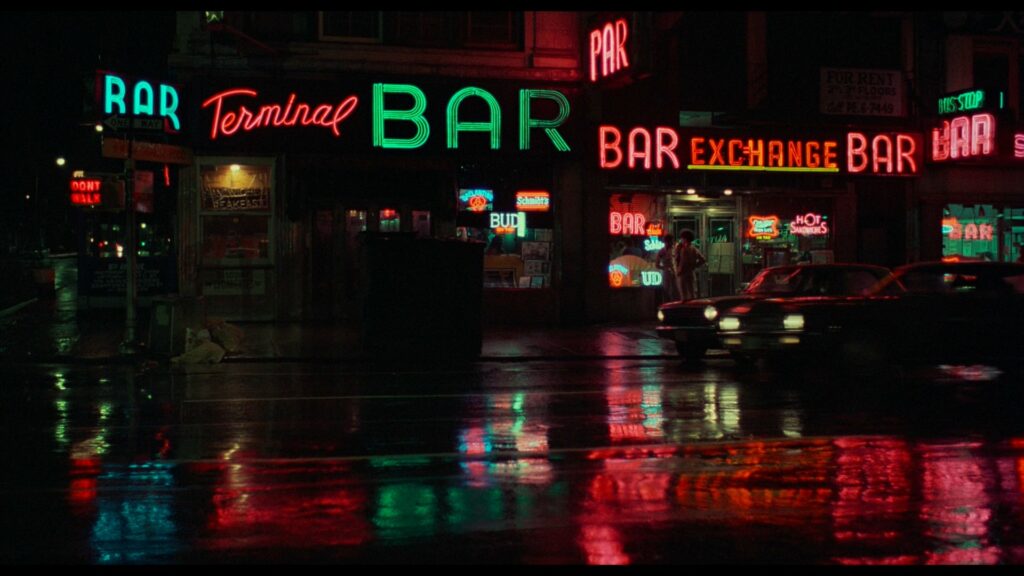 In one of the early scenes there’s some cab driver telling the story of some dude who got his ears cut off. That was at 122nd Street, which is ”fucking Mau Mau land”, and this is the beginning of the whole racism theme.

Schrader: ”There’s this racism theme here simply because people who feel they’re near the bottom of the ladder are always looking for people who are lower on the ladder. And they will find them. The easiest way to find them is racially and economically. There’s a kind of submerged and not so submerged race hatred in here. Not because he necessarily hates black people per se, but because he needs somebody to hate.”

And Travis is always trying to filter the world through the most conveniently threatening and dangerous looking people, i.e. The African-Americans. In pre-production people thought it was too socially irresponsible to portray the pimp as black. They were concerned that there might be riots because of this, so that’s how the pimp went from black to white and Harvey Keitel got the role as ”the great white pimp”. That way they left the racism in there, because Travis is a racist character, but they deleted the most prejudiced loaded part.

The scene where Travis wants some advice from ”The Wizard”, where Travis is on the verge of going psychotic, is really funny and a brilliant example of the lack of communication. The Wizard has no wisdom at all, he’s just hopelessly babblin’ away with his stale clichés. Travis understands that and just concludes: ”I don’t know, that’s about the dumbest thing I ever heard”. It makes me laugh every time. The scene ends with both of them saying they have no idea what the other one is talking about, or what they are talking about. Pure comedy.

The end
In the end, after the bloodbath, we hear Iris’ parents talk about how Travis was a hero. Newspaper clips reveal that ”a cab driver cleaned up amongst the scum” – he’s the hero there as well. But to many he’s just an insane monster. The psychotic hero.

You can work to cure cancer for 40 years and never get recognition for that, but take a shot at the president and you become a hero and end up in the magazines. That’s how media, fame and celebrity works. The movie ends this way as a comment on our cultural values.

Travis sure is a hero, but he has not changed. He will go on and on and do the same thing again, because that’s the way he is. The movie is a loop, which is shown very nicely as the movie ends with the same Chemtone effect used in the beginning. The way that Travis reacts in the end, when he sees something in the rear mirror, reacting in that old psychotic way, also indicates that the same thing is gonna happen again. 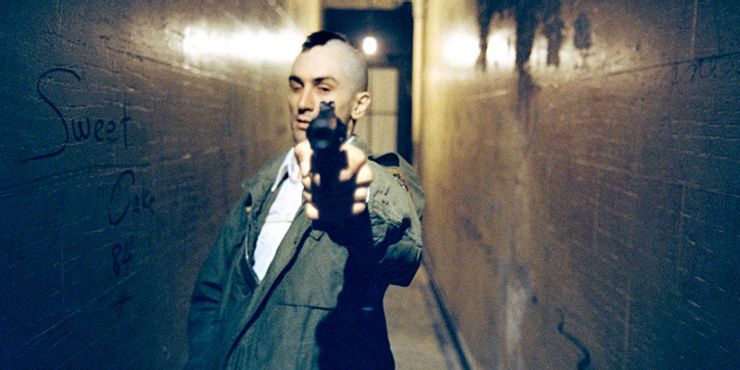 In 1981 John Hinckley (born 1955) attempted to assassinate U.S. President Ronald Reagan as the culmination of an effort to impress actress Jodie Foster. He saw Lee Harvey Oswald, John F. Kennedy’s assassin, as a role model and was obsessed by Jodie Foster. He also watched Taxi Driver over and over again. When Schrader heard that Reagan had been shot he said ”It’s one of those Taxi Driver kids”, and when he got back to his hotel the FBI was waiting for him to question him about whether he knew anything about Hinckley.

Schrader: ”What will happen if you censor genuine studies of this kind of pathology? You will still have the pathology, you just won’t have the study. You will lose the work of art that comments on the character, but the character will still be going along his merry way. Because he really wasn’t created by art.” Schrader concludes: ”It is a particular kind of breed of white boy these Taxi Driver people.”

Mental preparations for De Niro
When Robert De Niro prepared for the role as Travis he was doing another film in Italy called 1900. As he finished shooting 1900 on a Friday in Rome he’d get on a plane to New York, get himself a cab driver’s license, go to a garage and pick up a real cab and drive the cab around New York. Then he would turn it in and fly back to Italy for work again. He did that a couple of times. He also went to an army base in northern Italy to tape-record the accents of some kids he met there who were from an area in the Midwest (NY) that he thought would be good for Travis.

Another cool thing with De Niro is when he wanted to get to know Jodie Foster, who was only 12 years old at the time, he called her up and took her to various diners around town. He did this on several occasions, but he never did say anything. He literally said nothing. So she got bored, started playing with her food and so on. And then she started talking and soon got comfortable in his presence. And they started rehearsing their scenes over and over and over and over again. She got bored again, but in fact now knew him so well that she got bored because of that. And when they knew their scenes inside out he suddenly started to improvise, just saying stuff that was totally off the hook, a total surprise. That way the improvisation became real. 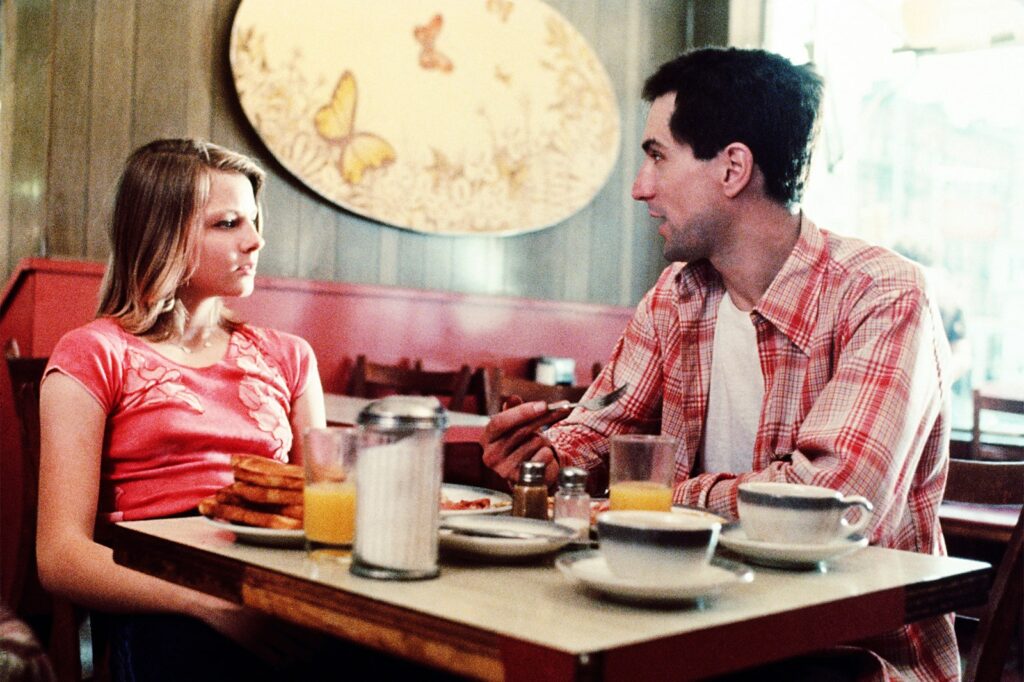 As for the mohawk haircut, it’s not real. He never shaved his head. The make-up people invented a special hair paste that made his real hair stay as close to his skull as possible, and then they’d add a shaven head and the mohawk in two separate pieces. Also, the mohawk was never in the script. Apparently Scorcese had run into some guy who’d been in Vietnam who told him that when people over there ”went over the hill”, i.e. was going to die in battle sacrificing for their people/country, they’d shave their head like that as a sort of ”don’t fuck with me, I’m going over the hill” statement. Schrader says he don’t know if this is true. Maybe it just became part of the legend, a part of all the stories about what happened in Vietnam.

The loop
In case you haven’t seen Taxi Driver I’d suggest you drop everything and do it now. And if you’ve already seen it, watch again. There are details everywhere that I bet you haven’t discovered yet. For example, Harvey Keitel’s fingernail… But that’s the kind of detail you’ll miss out on anyway if you’re watching a crappy copy on a crappy TV set in pure daylight with the kids running around. Watching a movie is about total concentration, and just like I can listen to good records over and over again, I can watch good movies over and over and over… until time becomes a loop.
It’s gonna happen again.