Alejando Jodorowsky‘s The Holy Mountain (1973) is one of my all time favourites. It’s about symbolism, mainly focused on spirituality and the occult, death, rebirth, mysticism and the extramundane, but also on capitalist production, militarism and the absurd. The visual vocabulary is unique and absolutely stunning. Press pause in any frame at any time throughout the whole film, and you will get an image that constitutes the most amazing art. After all, Jodorowsky was trying with all his soul to make a sacred film. He wanted to change mankind with it, make it a source of enlightenment for the audience, and he believed that cinema was better than LSD…

The Holy Mountain has certainly changed me and the way I look at things, and most importantly the way I look at movies. In my eyes, this is pure gold/excrements. It operates on so many levels and is filled with so much detail, I believe you need to experience it several times to grasp its universal themes. Knowledge of the occult, religion and its’ most basic symbols is essential for understanding. Sometimes it comes out deep as fuck, and sometimes it does not (to put it simply, haha!)… That’s what I love with this piece of art: It rules even when it sucks!

These posts are based on Jodorowsky’s commentary track for the Anchor Bay DVD edition, as well as the book The Spiritual Journey of Alejandro Jodorowsky. You may want to watch the movie while you read this text, and hopefully, a deeper kind of understanding will emerge on your highway to hell/nirvana or whatever you may fancy.

Here are the first three minutes of the film, as explained by Jodorowsky in the commentary track:

First, a set decorated without furniture. It’s clean, like a hospital, with crosses on the wall to convey a sense of mysticism. There are only essential objects, like a sacred ceremony. The master’s outfit conceals his face. He hides his face, like Mohammed. He is an essential being, without ego.

These are the actual movements of a Japanese tea ceremony. All the movements are conscious.

These two girls weren’t actresses. They wanted to have a spiritual experience. They were searching for their own truth, their naked truth.

[the camera sweeps across different images]
The inner God that opens in circles towards a greater consciousness.
A heart that opens towards a greater consciousness.
The target that the arrow must hit.
The eye of Buddha.
The pearl, the soul that must be polished.
When the door is opened, a key is found with the trilogy.
Now, descend into the world of the dead, to the world of the dreamless dreams.
Descending…
Butterfly wings symbolize metamorphosis.
Back up through the serpent, Kundalini… the pearls of Eros, until it arrives at a geometric figure, which is the interior consciousness.

After this three minute introduction filled to the brim with symbols of the occult, we meet the protagonist, the Christ like figure, the Thief, lying on the ground, and who through the course of the film will experience moments of enlightenment. Jodorowsky continues:

He’s ”The Fool” of the tarot. His face is covered with flies, symbolizing useless thoughts. He is urinating on himself. He’s drunk and lost. This is the card that defines him, the tarot’s Fool card. The Fool is always represented by an animal that is his ego. The frog is the ego. 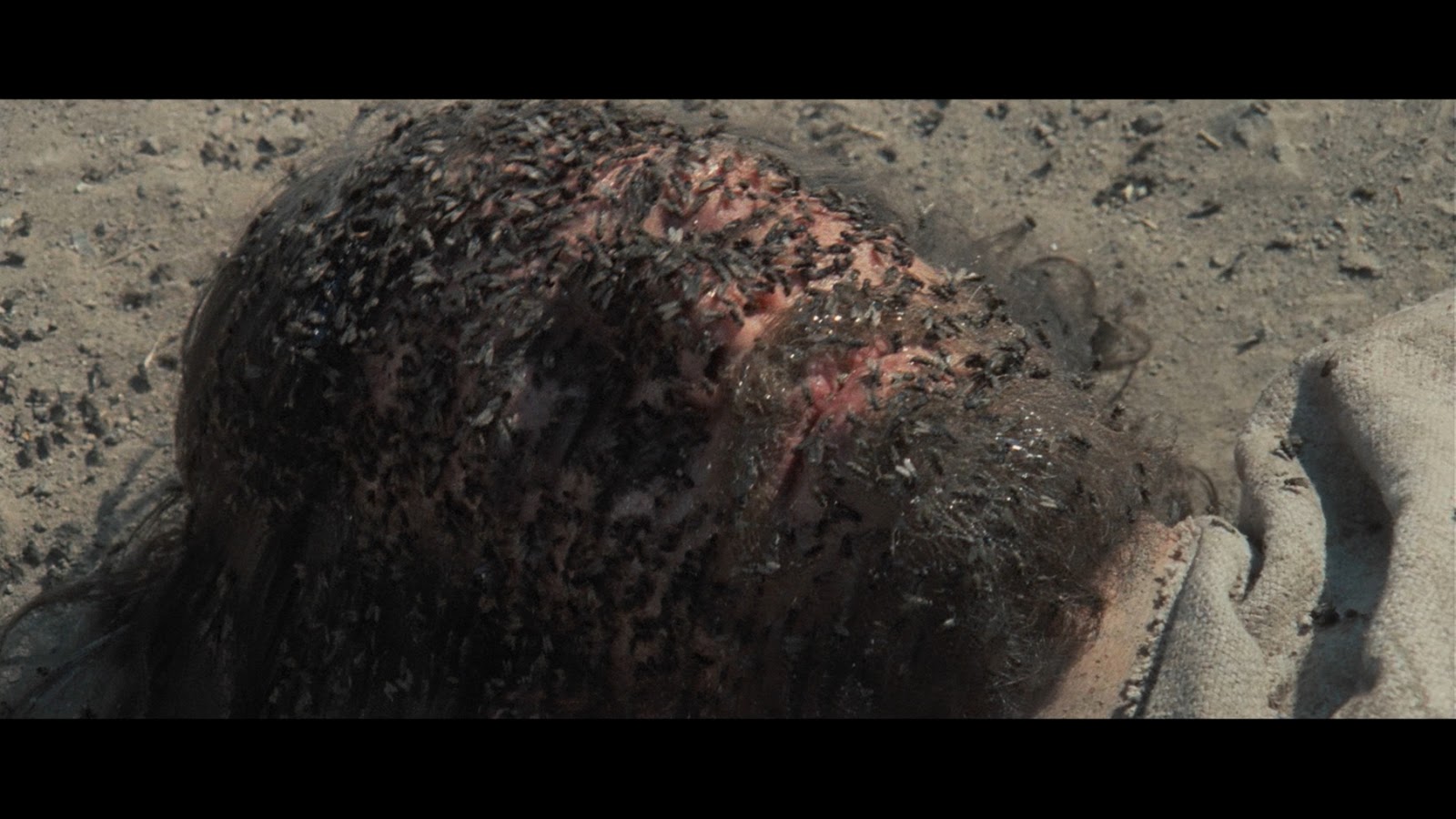 To be continued in Part Two.

4 thoughts on “The Holy Mountain – Part One”