>Impending doom. As for the riots in London, I refer to this article:

As for the American chaos, you may want to read this one:

The Crash, The Israel Lobby and The Change of Attitude – November 25, 2010

Now, let’s not forget about discussing who and what made Breivik a terrorist.

1. On the Radicalization of Anders Breivik by David Wood at Answering Muslims, who claims that ”none of the people being blasted by the media [Robert Spencer, Pamela Geller, Geert Wilders etc] had anything to do with Breivik’s extremism” and singles out mainstream media as the beast to blame.

2. Who inspired Anders Breivik? by Justin Raimondo at Antiwar.com, who in previous columns ”clearly assigned them [Spencer, Geller etc] their share of guilt” and now reexamines the issue ”in light of their vigorous denials”.

Watch and read them both.

The fact that David Wood is not even mentioning Fjordman (Peder Jensen) is very odd, since Fjordman’s influence on Breivik’s ideology is massive. Anyone who cares to read the manifesto (PDF) must see that, and anyone reading the manifesto should come to the conclusion that Breivik is an extreme narcissist with a Messiah complex. What he writes about himself and others has proven not to be trustworthy.

Hence, when David Wood speaks so eloquently about Breivik it’s all based on Breivik’s own words in the manifesto, which is also very odd. I’m not saying Breivik’s a complete liar, just that he’s lying. A lot. 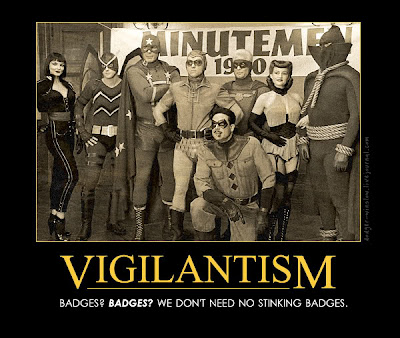 The publishers of the Gates of Vienna blog (where Fjordman is a frequent contributor) encourage us to read their articles and check their links. Justin Raimondo did just that, and found some really sick stuff written by some freak named ”El Inglés”. Here are some quotes from an article entitled On Vigilantism – Part One, published on Gates of Vienna, April 5 2010. There are many more.

Altering the response of the apparatus of state to Muslim crime may well emerge as one of the most obvious motivations for vigilante activity. If one is concerned about Somali drug-dealing and the lack of effective response by the state, then executing a few Somali drug-dealers and then calling a national newspaper with a) the justification for the killing and b) the calibre of the handgun used in the executions (for purposes of establishing one’s identity) will be likely to focus a certain amount of attention on the problem. […]

In contrast, any group of European vigilantes intent on taking the law into their own hands vis-à-vis Muslim crime would not suffer this restriction. Exceptional brutality will always have the potential to repel supporters and potential supporters, but it stands to reason that vigilantes in, say, Denmark, visiting impromptu justice on Arab street thugs in Copenhagen will have a much higher threshold of violence they have to cross before such revulsion starts to work against them. Indeed, everyday Danes tired of the Muslim crime now contaminating their country may well look to such people as their saviours, affording them support of various types. This will open up the potential for exceptional violence. […]

The efficacy of non-lethal violence in persuading these people to behave themselves in a more civilized manner is likely to be close to be zero. This leaves vigilantes with only one obvious option, which is to kill off the people in question. This will have the twin effects of a) making it impossible for them to engage in further crime, and b) creating at least some possibility that others like them might decide on a change of career.

The first comment on this article is by Fjordman. He does not condemn the maiming, beating and killing, but rather:

A thought-provoking essay from Inglés, as usual. May I also suggest that we cultivate a form of pan-European ethnic solidarity when it comes to stopping and reversing Third World immigration and removing the Globalist traitor class. Perhaps we can call it “white Zionism.” Since European group solidarity appears to be what the powers-that-be fear the most, perhaps that’s what we should give them.

I’d like to see a video by David Wood where he discusses the influence of Fjordman and Gates of Vienna in relation to what Breivik actually did.