Jews must be treated like everyone else. Israel must be treated as a normal and legitimate country. It is nothing odd with Pro-Israel organizations acting for the sake of Israel’s good. Hence Jews, Israel and Pro-Israel organizations must be praised when acting well and criticized when not. It’s as simple as that. Here lies no double standard, no conspiracy theory.
So let’s continue our treatment of the Israel Lobby.

We’ve seen how Israel benefits from economical aid which is ”beyond compare in modern history” (Yitzhak Rabin). Now let’s check out the diplomatic and military support provided by the United States. 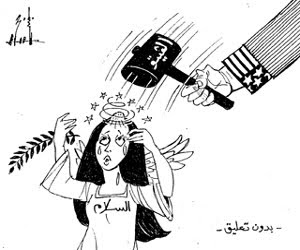 Between 1972 and 2006, Washington vetoed forty-two UN Security Council resolutions that were critical of Israel. That’s more than the combined total of all the vetoes cast by all other Security Council members for the same period and amounts to more than half of all American vetoes during these years.
A typical example: Among the many nations (114) supporting the resolution ”Israeli Practices Affecting the Human Rights of the Palestinian People” were Japan, Germany, France, China, and Great Britain. The resolution passed by a vote of 149–7 (with 22 abstaining and 13 nonvoting). The six countries that joined the United States to oppose the resolution were Israel, Australia, the Marshall Islands, Micronesia, Nauru, and Palau… That pretty much says it all.

Every year Arab countries try to raise the issue of Israel’s undeclared nuclear arsenal within the International Atomic Energy Agency, but due to Washington’s influence on the board the matter is constantly prevented from being placed on its agenda.

As for military assistance, there is no doubt that Israel is the military supremacist in the Middle East. The United States has provided Israel with nearly three billion dollars to develop weapons like the Lavi aircraft, the Merkava tank, and the Arrow missile. The Israelis have access to top notch U.S.-weaponry such as the F‑15 and F‑16 aircraft, Blackhawk helicopters, cluster munitions, smart bombs, etc., and they are also linked to the U.S. defense and intelligence establishments through formal agreements, making Israel’s armed forces one of the most technologically sophisticated militaries in the world. Please compare that to the weaponry of Hamas, for example the homemade Qassam rockets…
Here is an article about Palestinian rocket attacks on Israel. Human rights groups obviously condemn these attacks as war crimes, which they also do with Israeli attacks, especially the ones launched in the 2008–2009 Gaza war. In September, the UN Fact Finding Mission on the Gaza Conflict determined that both Israel and Hamas had committed serious violations of the laws of war, some amounting to war crimes and possible crimes against humanity. Read more about that here. 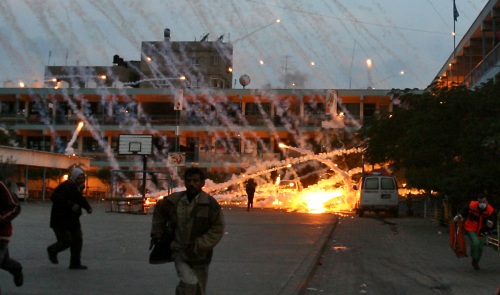 This photo allegedly shows the use of internationally proscribed white phosphorous weaponry.

America has been stockpiling weapons in Israel for many years (by 2008, the economic aid for stockpiling U.S. military supplies in Israel was 400 million dollars). This policy has been justified as a way to enhance the Pentagon’s ability to respond quickly to a regional crisis. However, Israel only permits the storage of materiel that may also be used in an emergency by Israeli forces. In this way, the Pentagon can never be sure if their arms and ammunition will be available in a crisis – it may already be in use by the Israeli forces…
And yes, the Israeli newspaper Yedioth Ahronoth reported in December 2006 that ”a great portion of the American equipment stored in Israel… was used for combat in the summer [2006] war in Lebanon.”

U.S. support in favor of Israel during wartime comes down to an endless list of death, suffering and tragedy that I won’t even be able to summarize. Please, read the ”The Great Benefactor” chapter in The Israel Lobby and U.S. Foreign Policy.
This support (economic aid, diplomatic protection and military assistance) has accomplished one positive end: it has helped Israel prosper. On the other hand, according to a 2003 poll, twenty out of twenty-one countries – including close U.S. allies like Britain, France, Canada, and Australia – found that a majority of the population believes that U.S. Middle East policy ”favors Israel too much”.
It is also perfectly clear that the United States has given far more than it has gained.

Is this generosity understandable?
What do the people of the United States say?