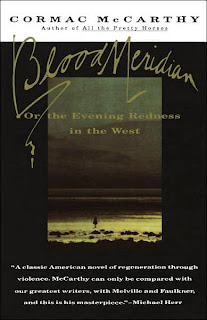 In the days to come the frail black rebuses of blood in those sands would crack and break and drift away so that in the circuit of few suns all trace of the destruction of these people would be erased. The desert wind would salt their ruins and there would be nothing, nor ghost nor scribe, to tell to any pilgrim in his passing how it was that people had lived in this place and in this place died.

The nihilism in McCarthy’s Blood Meridian is ever present, and it’s not that shallow, quick nihilism you might be used to. This shit is deep. The above quote could be seen as a description of what became of the original owners of the American land. Total death. Read more about that here.

As the gang rides – like the four horsemen of the apocalypse, but more of them – the world opens up showing its most grim and vile side. And in this world, the gang only live to kill, or rather: to kill before they are killed. McCarthy once said in an interview that he’s not particularly interested in books that don’t deal with issues of life and death. One commentary said: ”But his books are only about death, never about life”. I’d say it’s quite the opposite. Or rather: life is death. As simple as that. And McCarthy is the master of storytelling it in a beautiful and haunting way.
His visions are morbid, yet so full of beauty. They tell us things of utmost importance, things about life and how we are. He encompasses the brutal and more base elements of human nature, skipping the newspaper politics altogether, and still manages to convey a message: There won’t ever be a John Wayne type of character coming to the rescue. This is not the romantic West. This is the real deal, this is the brutal truth.

And the truth reads like the Old Testament, both in its biblical rhetoric and its doom-like message about the void, Satan (Judge Holden) and the slaughtering of innocence. This is pretty far from good versus evil – this is evil versus even more evil. And that’s what the Old Testament and this world is all about, right? Right. 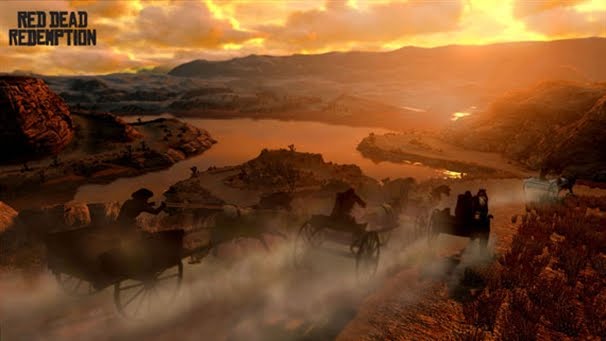 People speak of The Great American Novel. Well, thinking of how America is portayed in Blood Meridian, it sure is stunning and beautiful in its descriptions of the lawless West, but as for the people and the nihilism and misanthropy ruling the souls of the gang… Here is no peace. And in that sense, this is more like The Great Anti-American Novel.

That night they rode through a region electric and wild where strange shapes of soft blue fires ran over the metal of the horses’ trappings and the wagonwheels rolled in hoops of fire and little shapes of pale blue light came to perch in the ears of the horses and in the beards of the men. All night sheetlightning quaked sourceless to the west beyond the midnight thunderheads, making a bluish day of the distant desert, the mountains on the sudden skyline stark and black and livid like a land of some other order out there whose true geology was not stone but fear. The thunder moved up from the southwest and lightning lit the desert all about them, blue and barren, great clanging reaches ordered out of the absolute night like some demon kingdom summoned up or changeling land that come the day would leave them neither trace nor smoke nor ruin more than any troubling dream.

To be continued in part three…

6 thoughts on “>The Letting of Blood – Blood Meridian Pt. 2”