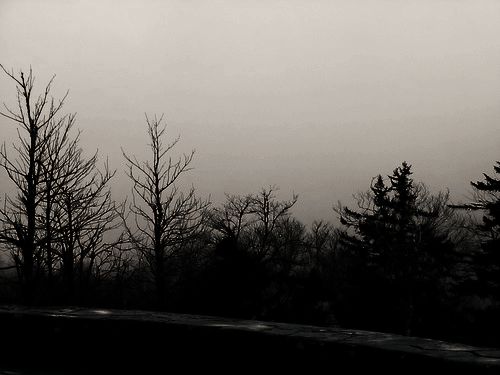 I still return to The Road, now probably because the movie is just around the corner, but ever since I first read it in December 2006 (read more here) I’ve been reading bits and pieces over and over again. Just like one does with good poetry. The way that Cormac McCarthy deals with the love and the darkness of mankind just overwhelms me every time. There are many passages where the dialogue between the man and the boy is so sparse, yet so very tense. There is all the room in the world for long and intricate conversations, but there are none. Simply because they are getting ready to die in a world where everything is lost, where everything is ashes and darkness and hopelessness.
The mother of the boy chose suicide when she realized that this was the end, when she watched distant cities burn. This makes the tenderness and the love shared between father and son even more heartwrenching. The post apocalypse has never been better.

This excerpt, where the man and the boy meet up with a lone traveller, a very old and torn man, is a good example of how the atmosphere, the cold, wet, ashen landscape, slowly devours the human bodies, but cannot fully erase the human emotions. Mind over matter.

How long have you been on the road?
I was always on the road. You cant stay in one place.
How do you live?
I just keep going. I knew this was coming.
You knew it was coming?
Yeah. This or something like it. I always believed in it.
Did you try to get ready for it?
No. What would you do?
I dont know.
People were always getting ready for tomorrow. I didnt believe in that. Tomorrow wasnt getting ready for them. It didnt even know they were there.
I guess not.
Even if you knew what to do you wouldnt know what to do. You wouldnt know if you wanted to do it or not. Suppose you were the last one left? Suppose you did that to yourself?
Do you wish you would die?
No. But I might wish I had died. When you’re alive you’ve always got that ahead of you.
Or you might wish you’d never been born.
Well. Beggars cant be choosers.
You think that would be asking too much.
What’s done is done. Anyway, it’s foolish to ask for luxuries in times like these.
I guess so.
Nobody wants to be here and nobody wants to leave. He lifted his head and looked across the fire at the boy. Then he looked at the man. The man could see his small eyes watching him in the firelight. God knows what those eyes saw. He got up to pile more wood on the fire and he raked the coals back from the dead leaves. The red sparks rose in a shudder and died in the blackness overhead. The old man drank the last of his coffee and set the bowl before him and leaned toward the heat with his hands out. The man watched him. How would you know if you were the last man on earth? he said.
I don’t guess you would know it. You’d just be it.
Nobody would know it.
It wouldnt make any difference. When you die it’s the same as if everybody else did too.
I guess God would know it. Is that it?
There is no God.
No?
There is no God and we are his prophets.