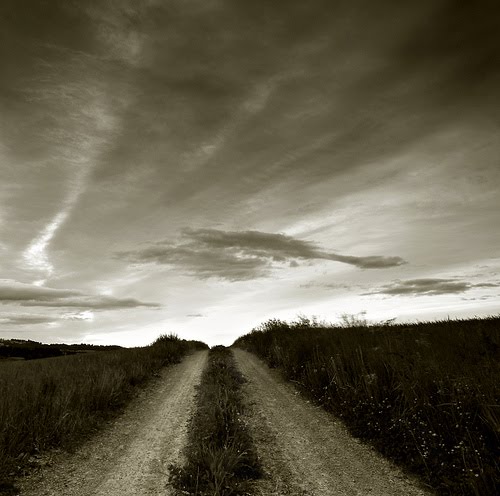 Since I like photos of endless, desolate roads and The Road so much, I once again give you a grim motherfucker of a Cormac McCarthy quote from hell. Or something like that.
I just got a hold of some of the songs from the soundtrack composed by the master duo Nick Cave & Warren Ellis, and I’ll be damned if this film won’t do it for me. The songs are close to perfection. The book is close to perfection. But the trailer is not that good, actually. Hopefully there’ll be a lot more mysticism, ashes, darkness and melancholy involved. As for the mysticism aspect, one of the great things about the book is that you never know what really happened, what caused the apocalypse.
The horror! The horror!

Things will be better when everybody’s gone.
They will?
Sure they will.
Better for who?
Everybody.
Everybody.
Sure. We’ll all be better off. We’ll all breathe easier.
That’s good to know.
Yes it is. When we’re all gone at last then there’ll be nobody here but death and his days will be numbered too. He’ll be out in the road with nothing to do and nobody to do it to. He’ll say: Where did everybody go? And that’s how it will be be. What’s wrong with that?

Everything was covered in ash.

2 thoughts on “>The Road — A neverending well of bliss”