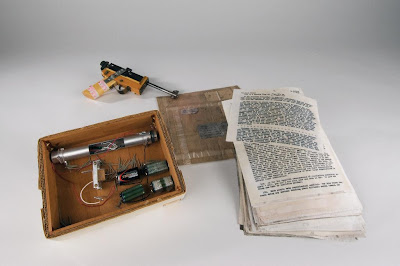 Inside the container, Ronay found fragments of a meticulously constructed homemade bomb that had been mailed from Chicago. What struck him was how elaborately and carefully crafted it was – though made entirely from ordinary materials found in any hardware store.
These included a cheap aneroid barometer altered to measure ambient pressure changes in the aircraft and altitude changes. The bomb was designed to explode when the plane reached over 2,000 feet in elevation. A second, redundant triggering system was fixed to ignite if the package was opened. A large juice can contained the main explosive charge of smokeless power and fireworks chemicals. The fusing system consisted of four ”C” batteries wired to a modified barometer switch, all housed in a homemade wooden box. The postage on the box comprised several $1 ”Eugene O’Neill” and ”America’s Light Fueled by Truth and Reason” stamps.

For each and every bomb being made, the genius mad man came closer and closer to perfection. Though each bomb was made of pipe plugs and the fusing systems were powered by C- or D‑cell batteries, each triggering mechanism was different. Old Ted was an imaginative man.

The Hauser bomb revealed the continuing evolution to ever more gratiously painstaking construction. The pipe was not the ordinary galvanized kind found at any plumbing supply store, threaded at each end and capped with threaded plugs. Rather, it was made of super-hard stainless steel that could only be cut, Ronay suspected, with a power saw. And the plugs were custom-made of a similarly hard material, crafted with care. At each end of the pipe were precisely sized square holes that coincided exactly with similar-sized notches in the plugs. The plugs were kept in place by square dowels carved out of hard steel. It took an excellent craftsman with a strong power drill and grinder to do this kind of work.
More troubling, the bomber was learning how to seal the explosives more tightly, thereby amplifying potential damage. And he was concocting more potent explosives. With the Hauser bomb, he had for the first time used a mixture of aluminium powder and ammonium nitrate, producing a much bigger bang and signaling to Ronay that worse was to come.

Reading this, and then looking at that tiny cabin he worked in, one becomes absorbed with fascination for the human mind. Or for this human mind, I should say. What really makes me wonder is how the hell he did manage to build his bombs when there was no electricity in the cabin? Ronay suspected he’d used a power saw and a power drill etc, but as far as I know no such tools have been found.
I hope I can find answers to that later on.

As for the final bomb, found in the cabin in April 1996, bomb-disablement expert Chris Cherry got a phone call from the FBI asking him to haul his ass over to the cabin. He lived in Albuquerque, whilst the cabin was located in Montana. Wasting no time the FBI flew down a special plane that night and picked him up immediately. He and his team were at the cabin for a week, and it took them three days to totally render safe the bomb itself.
”Our objective was not just to defuse the bomb but to surgically defuse it so that we would have all the evidence captured. We couldn’t just blow apart the bomb. We had to go into it to ensure that all the evidence was preserved and we understood the working functions of it”, says Chris in an interview.
The team used Kaczynski’s extremely detailed notes about all his devices and how they were put together. There were loads of them, but they were written in Spanish, so first they had to be translated.
The bomb was a fragmentation device designed to kill people. It was all home-made and designed to be rough-handled through the mail. The switch mechanisms Kaczynski used were hand-made switches that he would spend weeks building. He even machined his own screws.
Chris: ”The device was complicated in that it was guaranteed to work. It was not your basic pipe bomb. It was much more sophisticated than that. Every one of his devices functioned as designed.”

Some stuff found in the cabin: 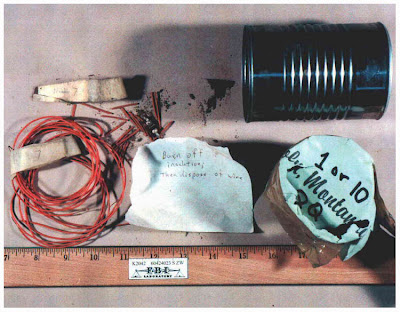 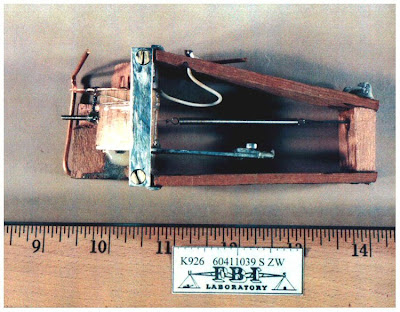 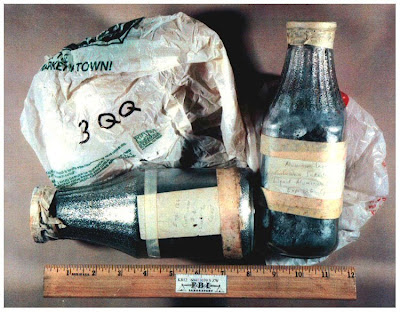 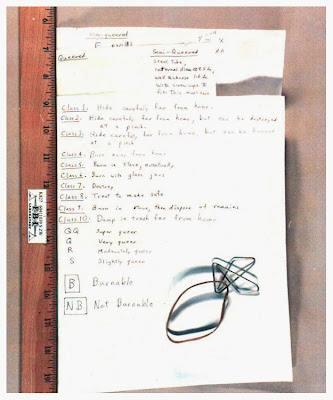