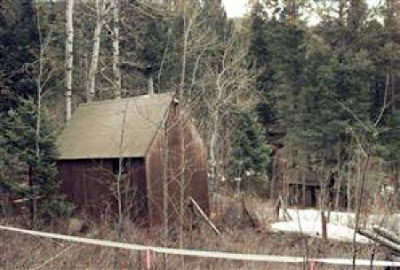 Before summarizing what I’ve written about Kaczynski, I’d like to write about his life in the wild. As stated earlier, this wasn’t as ”into the wild” as people seem to think. He was always in sight of his nextdoor neighbour, for example. The place he chose offered no solitude. The area was pretty much clogged with summer and hunting cabins. Snowmobilers, hunters, gold diggers and loggers constantly roamed the woods. If he’d went further into the wild he’d also find much cheaper places. The thing is that being this close to civilization made it easier for him to execute his revenge. Planting the bombs required travelling. Had he been too far off it would have been too time consuming getting where he wanted to kill. Also, with all these people disturbing the peace he would increasingly become very angry. They fueled his hatred. 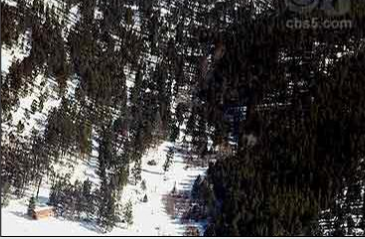 The cabin in the lower left.

As we now know, the culture of despair had undergone transformation, from worry about society to worry about nature. Ecologists in the 1940’s concluded that in nature, every part plays a role in keeping the system in balance. If the system loses parts we will suffer ecological collapse.
Guided by this reasoning, ecologists began searching for signs of balance in nature. However, they could only find very few, and instead found great instability. Therefore, by the 1960’s, they would conclude that we were in the middle of a global environmental crisis. This caused pessimism to spread and it obviously nurtured the culture of despair, and The Unabomber and his anti-technology agenda.
However, by the mid-1980’s, most ecologists would realize that their previous assumptions were false. There is no balance in nature. There never had been any balance to find. But in the 1970s, they didn’t know that… And in 1971 Ted starts to build his cabin.

Many young people were willing to try anything to get away from everyday pessimism, slave-like labour and hopelessness. They wanted to reach a higher level of consciousness. Self-hypnosis, meditation, dream journals, Tai Chi, karate, Feldenkrais, Kabbalism, Buddhism, therapy studies… stuff like that. Some of them sought escape in nature, hoping to construct new communities, often supported by the economy of marijuana. They moved out and grew pot, so to speak.
Some of them soon embraced a form of terrorism labelled ”ecotage” — ecological sabotage – dedicated to saving nature, where monkeywrenching soon became the thing to do. Monkeywrenching is a tactic which was used at first by students protesting the Vietnam war. It’s all about vandalism in the name of environmental protection, like destroying machinery, roadside signs, hammering lots of nails into the trees which will cause chain saws to virtually explode in the operator’s hand… At first, since these people did harm to property, not people, they were treated almost as harmless by the national media. But like all historical movements, ecotage came to have its imitators who didn’t shy from real violence. Alston Chase writes in his book Harvard and the Unabomber: ”In these groups, America was for the first time encountering the mind of the modern terrorist”.

Another group of people, sometimes called the Silent Generation, believed that the collapse had already occured. They found that their world had simply disappeared. The 1960’s should have been their days of joy, their salad days, but instead everything went over their heads. The 1960’s were years of chaos. They didn’t fit in. Some of them simply kept low profiles, getting on with their day to day lives, sticking to the family and the job. Others sought escape in nature.
But while the young people were motivated by a desire to get close to nature, the Silent Generation wanted to get away from a world gone mad, away from public life, away from people. The young were optimistic and active, the Silents were pessimistic and passive. Kaczynski’s birth date – 1942 – lay at what demographers consider to be the gap between the Silents and the youngsters. He was pessimistic, but he also wanted action. Despair and commitment would be a deadly combination.

Kaczynski’s life in the cabin was mostly dedicated to learning and gathering information. He was a frequent visitor to the library, to say the least. He read books on woodcraft, botany, organic chemistry, poison antidotes, nutrition, pesticides, Indian customs, rifle shooting, first aid, wilderness medicine, seeds, weeds, trees, animal tracks, mushrooms, edible and poisonous plants, wildflowers… You name it, he read it and made efficient use of it.
The cabin he built was ten by twelve foot (3 x 3,5 metres), and he also dug a root cellar and planted a garden. Instead of digging a well, he got water from a creek with a hose. Life would’ve been good, but as Chase writes: ”No sooner had he settled in his Eden than serpents appeared”. Kaczynski was very sensitive to noise, and the sounds of chainsaws, snowmobiles, jet planes, helicopters, people – the serpents – made him even more angry. So he decided to take action. He strung wires across trails hoping to get the bikers, he shot at helicopters and he destroyed peoples’ stuff.
He writes in his journal:

Risky to commit crime so close to home. But I figured if I did not get those guys, the anger would literally kill me. Anyway, so one night in fall I sneaked over there, though they were home, and stole their chainsaw, buried it in a swamp. That was not enough, so couple weeks later when they had left the place, I chopped my way into their house, smashed up interior pretty thoroughly. It was a real luxury place. They also had a mobile home there. I broke into that too, found silver painted motorcycle inside, smashed it up with their own axe. They had four snowmobiles sitting outside. I thoroughly smashed engines of those with the axe.

I set a booby-trap intended to kill someone, but I won’t say what kind or where because if this paper is ever found the trap might be harmlessly removed.

When Exxon did seismic explorations for oil, using dynamite from helicopters in the area:

Early August I went and camped out […] hoping to shoot up a helicopter in area east of crater mountain. Proved harder than I thought, because helicopters always in motion, never know where they will go next. Tall trees in way of shot. Only once had half a glance. Two quick shots, roughly aimed, as copter crossed space between two trees. Missed both. When I got back to camp I cried, partly from frustration at missing, but mostly grief about what is happening to the country. It is so beautiful. But if they find oil, disaster. Even if not find oil, the blasts and helicopters ruin it.  Desecration. Where can I go now for peace and quiet? 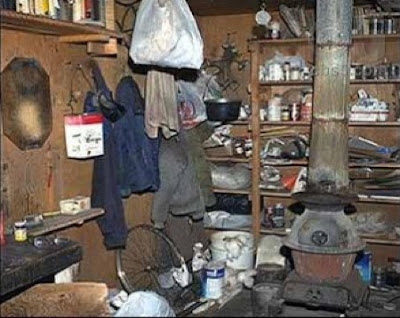 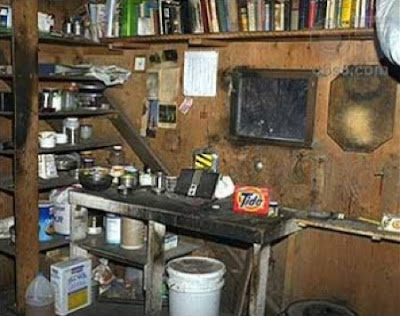 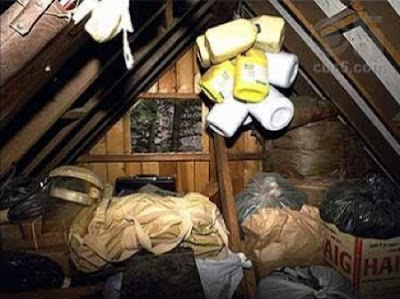 The removal of the cabin as evidence. 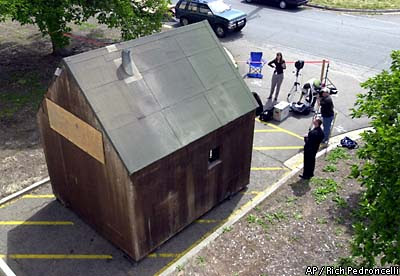 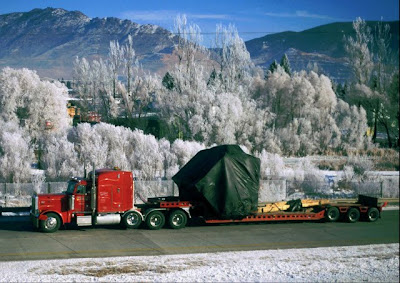 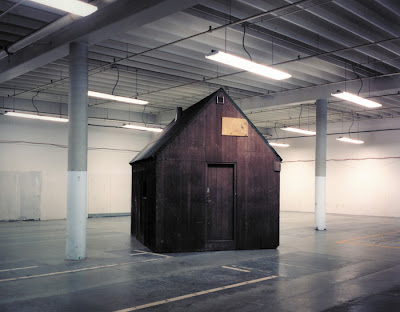 The cabin, now an artifact owned by the FBI, I think.

As Kaczynski slowly became addicted to violence his campaign of terror slowly made him feel worse. He hated his family, and wanted to break totally with them, but he was dependent on their financial aid. The more complex his bombs, the more money he needed, and his family was the only source of income. His anger and frustration went off the charts. In February 1987, when planting the very deadly bomb number twelve, he was seen by an employee who gave a good portrait of him, and Kaczynski was frightened. Between 1987 and 1992 he stopped with his bombings, instead testing new mixtures and devices to find the perfect detonator at secret sites in the wilderness behind his cabin.