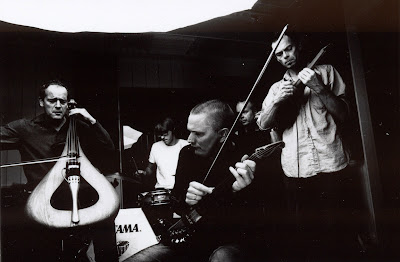 The Fleshquartet, or Fläskkvartetten (they switch between names now and then), got me interested in classical music and experimental stuff way back in 1987. I watched the Swedish TV show Daily Live, where their weird mix of classical music, modern rock and experimental madness made a huge impression on me. Their collaboration partners include the amazing Freddie Wadling, Stina Nordenstam, Morgan Ågren, Robyn, the great poet Bruno K. Öijer, Västerås Sinfonietta and many others. Browsing through my record collection I find that the band that I own most records with is actually The Fleshquartet. How interesting! And people think I only listen to black metal and Public Enemy…

I’ve never liked their embarrassing rap elements, though (or even worse, their rap metal elements…). Every track where Tim Wolde (MC Tim!) or Zak ”Clawfinger” Tell contribute really suck. In my opinion, they are at their best either when they freak out or when they ease down. The traditional rock songs are understandably rather boring. It’s almost as if they made these tunes to sell more records or something. Too bad, because they’ve created much more interesting stuff compared to that mainstream crap. Swedish Television has aired the concert with Västerås Sinfonietta on some rare occasions, and I think I’ve watched it a hundred times by now. It’s pure magick. I’ll try to make it available on the net in the future.
In my opinion, their best effort thus far is the Love Go album, released in 2000, to be found here. It mainly consists of modern classical music, sounds almost like a film score, and it’s jawdroppingly beautiful. Check it! Also go get Freddie Wadling’s amazing album A Soft-hearted Killer Collection if you want the best of his Fleshquartet songs.

The Fleshquartet – Lave (from the Love Go album)