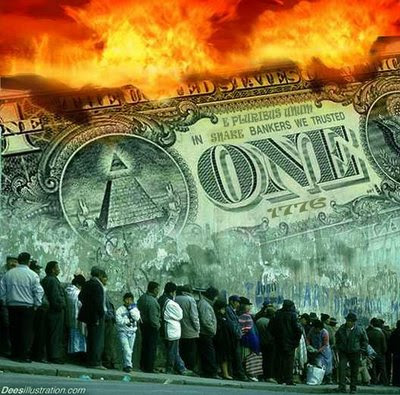 The United States are facing a lot of internal problems at the moment, and the economic crisis probably hits and hurts the most. Can America really afford the $5 billion-plus that it annually provides to Israel? Its foreign policies are intended to benefit Israel, and the United States of course, but many of them have damaged relations and interests for both countries. It’s pretty obvious that the current level of U.S. support for Israel cannot be justified, especially not in times of despair.

43 million Americans live beneath the poverty level, including one in every five children. America’s richest one percent of the population own over 40 percent of America’s wealth. Hence, wealth is concentrated in too few hands, and the general public is burdened by too much debt to be able to buy goods produced by the corporations, where the wealthiest hold 81 percent of the stock… Of course there is a great CRASH because of this, and the end game of this massive wealth concentration is nothing but economic misery. You cannot tame the Wall Street greed machine.

Me, I’m not very good at economics, but the much spoken about Money as Debt film made me realize a few things. I highly recommend watching it, as well as its sequel Money as Debt II – Promises Unleashed.

–> Click here for Money as Debt with Swedish subtitles <–

However, going back to the Israel issue, American attitudes towards Israel are changing, pretty much with each Israeli outrage, such as the bombing of Lebanon and Beirut during the July 2006 war, and the civilian slaughter – more than one-third women and children – in Gaza 2008/2009. Americans are also becoming weary of Israel constantly moving the goal post in the ”peace negotiations”, and seem to realize how Israel always ridicule Obama whenever he tries to condemn Israeli settlements. Within days, Israel often announces more settlement construction. The Israel Lobby plays a big part here, and the fact that Obama is actually criticizing Israel will probably mean that his time as a President will be a one-term only. The Israel Lobby won’t tolerate that kind of behaviour.

Just the other week, Obama criticized Israel for announcing the process of 1,300 housing units in Jerusalem. He warned: “This kind of activity is never helpful when it comes to peace negotiations.  I’m concerned that we’re not seeing each side making the extra effort involved to get a breakthrough.”
Israel’s reaction: Knesset members as well as AIPAC staff attacked Obama, saying that he is ignoring the reality of Israel’s needs in Jerusalem.

At the same time, Zeinab Hajj, a 30 something Palestinian born, raised and still living in Shatila Camp and known for hosting many visiting thinking Americans in her family’s already crowded rooms, explains her situation: ”We know the American people are fair minded but their government has been hijacked by Zionists as surely as our land has been stolen by Zionists. In one sense the American people and the Palestinian people share the same dilemma and we have the same need to liberate ourselves.”

The collapsing American economy is also a huge factor when it comes to the American public distancing itself from Israel. Many do no longer believe in the American dream. Apple and Coca-Cola, Google and Microsoft are putting their money in Asia, where labor is cheap and markets are growing, and very little in the United States. It is rumoured that the Tea Party will insist on terminating foreign aid of all kinds if the U.S. unemployment level rises above 4 per cent. The times they are a changing…

The ADL is not changing, though. They are terrified, and recently sounded the alarm at the Inter-Parliamentary Coalition for Combating Anti-Semitism, where fifty countries from six continents sent delegations to help combat what ADL’s Abe Foxman claims is ”a dangerous softening of US public opinion for Israel”. Apparently they were talking about ”cyber hate” and the usual bullcrap used in their campaigns of fear…