>Yesterday, across the crowd of the boulevard, I found myself touched by a mysterious Being I had always desired to know, and whom I recognized immediately, in spite of the fact that I had never seen him. He had, I imagined, in himself, relatively as to me, a similar desire, for he gave me, in passing, so significant a sign in his eyes that I hastened to obey him. I followed him attentively, and soon I descended behind him into a subterranean dwelling, astonishing to me as a vision, where shone a luxury of which none of the actual houses in Paris could give me an approximate example. It seemed to me singular that I had passed so often that prodigious retreat without having discovered the entrance. There reigned an exquisite, an almost stifling atmosphere, which made one forget almost instantaneously all the fastidious horrors of life; there I breathed a somber sensuality, like that of opium smokers when, set on the shore of an enchanted island over which shone an eternal afternoon, they felt born in them, to the soothing sounds of melodious cascades, the desire of never again seeing their households, their women, their children, and of never again being tossed on the decks of ships by storms. 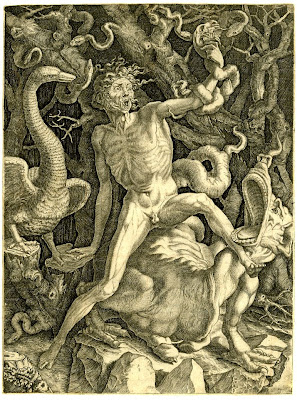 There were there strange faces of men and women, gifted with so fatal a beauty that I seemed to have seen them years ago and in countries which I failed to remember and which inspired in me that curious sympathy and that equally curious sense of fear that I usually discover in unknown aspects. If I wanted to define in some fashion or other the singular expression of their eyes, I would say that never had I seen such magic radiance more energetically expressing the horror of ennui and of desire—of the immortal desire of feeling themselves alive.

As for mine host and myself, we were already, as we sat down, as perfect friends as if we had always known each other. We drank immeasurably of all sorts of extraordinary wines, and—a thing not less bizarre—it seemed to me, after several hours, that I was no more intoxicated than he was.

However, gambling, this superhuman pleasure, had cut, at various intervals, our copious libations, and I ought to say that I had gained and lost my soul, as we were playing, with a heroic carelessness and lightheartedness. The soul is so invisible a thing, often useless and sometimes so troublesome, that I did not experience, as to this loss, more than that kind of emotion I might have, had I lost my visiting card in the street.

We spent hours in smoking cigars, whose incomparable savor and perfume give to the soul the nostalgia of unknown delights and sights, and, intoxicated by all these spiced sauces, I dared, in an access of familiarity which did not seem to displease him, to cry, as I lifted a glass filled to the brim with wine: “To your immortal health, old he-goat!”

We talked of the universe, of its creation and of its future destruction; of the leading ideas of the century—that is to say, of progress and perfectibility—and, in general, of all kinds of human infatuations. On this subject His Highness was inexhaustible in his irrefutable jests, and he expressed himself with a splendor of diction and with a magnificence in drollery such as I have never found in any of the most famous conversationalists of our age. He explained to me the absurdity of different philosophies that had so far taken possession of men’s brains, and deigned even to take me in confidence in regard to certain fundamental principles, which I am not inclined to share with anyone.

He complained in no way of the evil reputation under which he lived, indeed, all over the world, and he assured me that he himself was of all living beings the most interested in the destruction of Superstition, and he avowed to me that he had been afraid, relatively as to his proper power, once only, and that was on the day when he had heard a preacher, more subtle than the rest of the human herd, cry in his pulpit: “My dear brethren, do not ever forget, when you hear the progress of lights praised, that the loveliest trick of the Devil is to persuade you that he does not exist!”

The memory of this famous orator brought us naturally on the subject of academies, and my strange host declared to me that he didn’t disdain, in many cases, to inspire the pens, the words, and the consciences of pedagogues, and that he almost always assisted in person, in spite of being invisible, at all the scientific meetings.

Encouraged by so much kindness, I asked him if he had any news of God—who has not his hours of impiety?—especially as the old friend of the Devil. He said to me, with a shade of unconcern united with a deeper shade of sadness: “We salute each other when we meet.” But, for the rest, he spoke in Hebrew.

It is uncertain if His Highness has ever given so long an audience to a simple mortal, and I feared to abuse it. 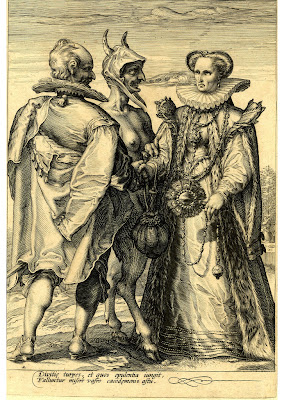 Finally, as the dark approached shivering, this famous personage, sung by so many poets and served by so many philosophers who work for his glory’s sake without being aware of it, said to me: “I want you to remember me always, and to prove to you that I—of whom one says so much evil—am often enough bon diable, to make use of one of your vulgar locutions. So as to make up for the irremediable loss that you have made of your soul, I shall give you back the stake you ought to have gained, if your fate had been fortunate—that is to say, the possibility of solacing and of conquering, during your whole life, this bizarre affection of ennui, which is the source of all your maladies and of all your miseries. Never a desire shall be formed by you that I will not aid you to realize; you will reign over your vulgar equals; money and gold and diamonds, fairy palaces, shall come to seek you and shall ask you to accept them without your having made the least effort to obtain them; you can change your abode as often as you like; you shall have in your power all sensualities without lassitude, in lands where the climate is always hot and where the women are as scented as the flowers.” With this he rose and said good-bye to me with a charming smile.

If it had not been for the shame of humiliating myself before so immense an assembly, I might have voluntarily fallen at the feet of this generous gambler, to thank him for his unheard of munificence. But little by little, after I had left him, an incurable defiance entered into me; I dared no longer believe in so prodigious a happiness, and as I went to bed, making over again my nightly prayer by means of all that remained in me in the matter of faith, I repeated in my slumber: “My God, my Lord, my God! Do let the Devil keep his word with me!”

2 thoughts on “>The Generous Gambler by Charles Baudelaire”