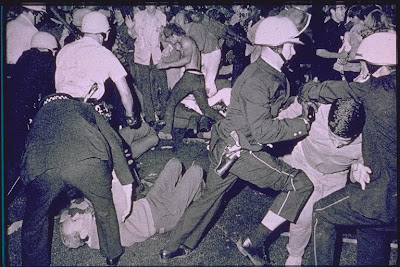 The 60’s were years of chaos. People began feeling a sense of disillusionment with the system. To Kaczynski this would become disastrous. As he continued to suffer through Murray’s experiments, he began to worry about society’s use of ”mind control”. He was convinced that academics – in particular scientists – were servants of the system, employed to develop techniques for behavioral control of populations. And Murray, who treated human beings as guinea pigs, and who was at the forefront in his field, widely accepted by everybody, wasn’t the only cause for Kaczynski’s conviction.

Alston Chase, in his book Harvard and the Unabomber, has a seemingly endless list of what caused the chaos and conviction:
Technological progress, the space race, the escalation of the Cold War, the sexual revolution, the birth of drug culture, television, the civil rights revolution, consumerism, the environmental awakening, The Cuban missile crisis, A Clockwork Orange, One Flew Over The Cuckoo’s Nest, The Manchurian Candidate (a movie about brainwashing and mind control), the first Wal-Mart store, the birth-control pill, the women rights movement, Timothy Leary, the assassinations of Jack and Bobby Kennedy, Malcolm X and Martin Luther King Jr., the ”Summer of Love”, anti-Vietnam war protests, riots in hundreds of cities and college campuses, the moon landings, Woodstock, the Bay of Pigs fiasco, the Cambodia bombings…

In 1967 around 150,000 people marched against the Vietnam War in New York and San Francisco. Later that year, another 150,000 protestors marched against the Pentagon. The CIA launched ”Operation CHAOS”, a plan to spy on American citizens that would eventually collect the names of 300,000 people. In March 1968, FBI director J. Edgar Hoover initiated a Counter-intelligence program against what they called ”Black-Nationalist-Hate-Groups”. Two weeks later, the assassination of Martin Luther King Jr. triggered race riots in 125 cities, causing 46 deaths, 21,270 arrests, and involving 55,000 National Guard and federal troops. In November, students at San Francisco State College began a strike against the war that would last five months.
At Harvard, April 9, 1969, the home of Theodore Kaczynski, things would change too. Without warning, three hundred students charged the steps of the administration buildings and hung the red and black banner of the SDS (Students for a Democratic Society) from a window. Altogether, forty-one students were injured.
Chaos reigned and The Age of Reason had come to an end. The last nails in the coffin of the Western civilization was about to be driven down.

The influental French philosopher, historian and sociologist Michel Foucault had come to the conclusion that ”there was morality nowhere” (in the words of Norman Cantor). ”His culture is a culture of political despair. He sees only a struggle for power, a manipulation of ideas and ethical values by all groups of society through all moments of time, including the present.”
The shift of emphasis from the individual to the system reinforced feelings of helplessness. The system ruled and everyone was a victim. This was eventually distilled down into one thought: The system rested on power alone and therefore must be destroyed.

Theodore Kaczynski chose to retreat to the wilderness. He wanted to escape the clutches of civilization and then later plot its destruction. 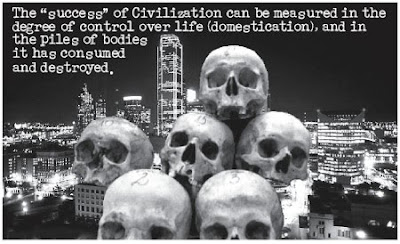